Poor Emily! For the last four years, she’s been an itchy, red girl in the summertime. For the longest time, I didn’t know what was causing her face and arms to break out every time we went swimming. Eventually, I figured out that she was having a reaction to the sunscreen.

I tried lots of different kinds of sunscreen products. Most of them said they were for sensitive skin, but she would still break out and her face would get very red and itchy.

Several weeks ago, Emily’s preschool had a “Water Fun Day”. The teachers asked that we put her swimsuit and sunscreen on before she got to school so that they would have an easier time getting the kids outside to the water play area later in the day. I had bought a new “sensitive skin” sunscreen and Nanny put that on her before she went to school. Emily was fine all day until they went outside to play. Then her face turned bright red and she started complaining that it was itching. By the time she got home, her face and arms were red hot and painful.

I did a little research online and found that some sunscreen allergies only react when you’re out in the sun. It’s not the sunscreen sitting on the skin that is the problem. It’s when the ingredients in the sunscreen are activated by the sun.

So I went to sunscreen aisle at Wal-mart and read the labels on all the products that they had. I finally found one that contained only physical blockers. It’s made by Neutrogena and contains titanium dioxide and zinc oxide. 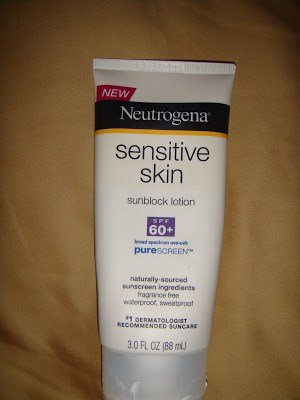 Finally! Something that worked for us! I put this on Emily the other week when we were at Tyler’s birthday party. She stayed out in the sun for quite a while, but experienced no itching or redness. Now I’m looking forward to a fun summer in the sun.

Good for her, I'm glad you found one. I love anything Neutrogena. They make some good stuff. Enjoy the sunshine. =)