This weekend, Mike helped me put up some shelves that I bought a couple weeks ago. (Hobby Lobby, 50% off – Score!) I wanted something to go over the TV since we are not ready to purchase an entertainment center for our new TV yet. We were able to get one side of each shelf into a stud in the wall. The other side was hung using a wall anchor. 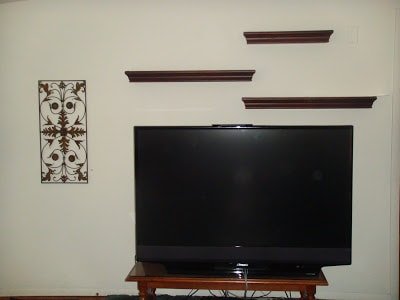 We also hung a small shelf by the clock. I want to put some pictures and maybe some greenery on the shelves, but I haven’t gotten that far yet. 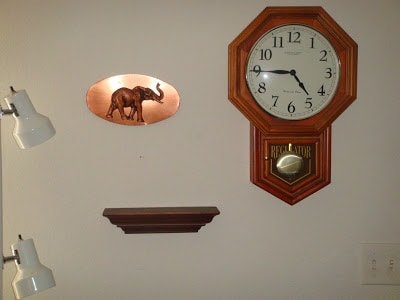 I will admit that this was a multi-day project for us. Each shelf came with a pattern that I cut out and taped onto the wall to try different positions for the shelves. After I moved them all around several times, I finally decided on a basic configuration. Then I had to identify the studs. I knew I wanted at least one end in the studs for stability so I had to change my configuration based on where the studs were located.
After I located the studs, I had to level the shelves. During this process, one of the paper patterns ripped and so I had to “make do” and still try to get the thing level. After I did all this, I asked Mike to check (and adjust) the level.
I followed the mantra “Level twice, screw once.” Even with this, one of the shelves ended up un-level when it was installed on the wall. Argh! We finally got that one worked out. I would say it was smooth sailing, but really it was not.’
But … all’s well that ends well.
So what do you think? I think it will look a lot better when I get something on the shelves.
Click here to cancel reply.

Looks great! I always have a fit when I have to hang stuff up. It is indeed a hassle looking for a stud and then making sure it is level. Hope you all are doing well.