Skip to Content
Mike’s birthday is the end of next week. Emily and I picked out a couple things for his birthday and then I thought of something else that he might like. So I ordered that too.
It was going to be a surprise. I had not mentioned this thing to him at all so he had no idea that I was thinking of getting it.
This surprise birthday present was scheduled to be delivered yesterday. Since Emily and I had Cubbies, Mike was the first to arrive home. He immediately noticed a quite large box on the front porch.
Mike started texting me at church –
“Are you expecting a package?”
“What is it?”
“Is it a birthday present?”
Hmmm … this is not normal questioning about a package on the porch.
It’s awful nosy questioning!
So Mike finally tells me that the package was delivered in its retail packaging – he could see exactly what it was .. and he figured out that it was his.
Bummer! How disappointing that a company would spoil my surprise just to save a few bucks on packaging. 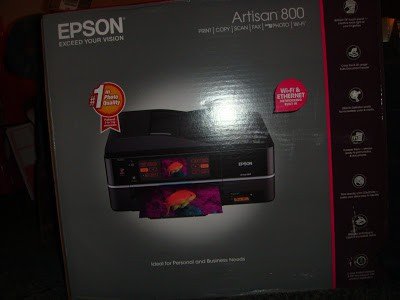 Mike says I am really not having good luck with surprise gifts. First was the issue with the Dell order and now is the spoiled surprise with the Epson printer. And these are some of the biggest names in the industry and yet I am still disappointed. What gives? Customer satisfaction is at an all time low and they don’t make any more effort than this?