I had been asking Emily what letter person she wanted to be. I was hoping she would say “Ms. E” the Exercise Expert. I thought that one would be pretty easy. Or maybe “Mr. B” Beautiful Buttons. (Vowels are girls and consonants are boys.) That one would be fun.

How do you create an outfit for Ms. A? Give a kid a box of Kleenex and send them on their way. Yeah, somehow i don’t think that would work.

So I decided to get a t-shirt and put a handkerchief in the pocket. Except that the shirt I found didn’t have a pocket. So I had to make a pocket with hankey out of a red bandanna. The A is made of foam and Emily helped me cover it with red pom poms. 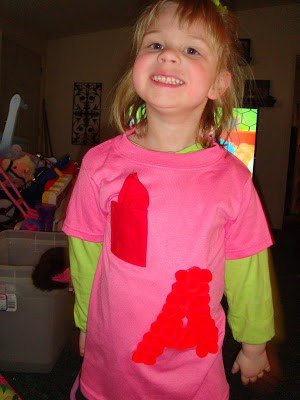 We had such a good time that Emily wanted to put more pom poms around the neckline of the t-shirt. She wanted to put them around the arms too, but we didn’t have enough pom poms to go around. We used every one that we had though.

This is one fancy shirt and I think it turned out really cute. Emily and I really had a good time putting it together earlier this week. I hope she enjoys wearing it to school tomorrow. 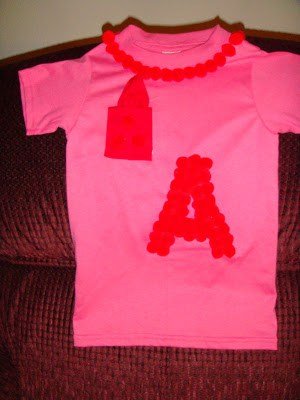 And you can see below what Ms. A really looks like! I thought she was pink and red, but apparently not. Ha! 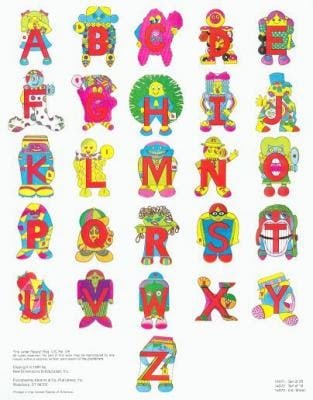 Ya'll did a great job designingMs A. Poppa said she would be thecute's one.