Today, Mike was gone to an all day class. So I got to enjoy a day at home all to myself. With two kids, of course. Mike helped me with Noah’s 5:30am feeding. Then we put Noah back to bed, Emily woke up and Mike let me sleep in until almost 8am. It was almost like a dream come true. I could have stayed in that bed much longer except that I wanted to get a shower before Mike left for his class.

The kids and I just hung around the house all day. Emily and I watched a little Brady Bunch, did some laundry, colored, and tended to baby. Then after a delicious lunch of peanut butter and jelly (you know, kids eat their food better if the parents are eating the same thing), Emily settled in for her nap. Noah was napping in his swing so I did the only reasonable thing to do – log in to work for a bit. I know – shame on me. But it’s hard not knowing how things are going while I’m away.
Mike got home at around 5:15pm and he wanted to take me out to dinner as sort of a thank you for letting him go to the class today. We went to a local BBQ place and had a nice time. I LOVE asking for a table for four. While we were there, Mike’s mom called and invited Emily to spend the night and go to Sunday School with them in the morning. But Emily didn’t want to go. I think she has been missing spending time with her dad.
New, New, New
I mentioned the other day that Noah has been having some fussy evenings. On Friday, he was fussy between feedings all day and I noticed that he had not pooped that day. So when Mike got home from work, we went into town and picked up a new kind of formula. I had done some research online to find a formula that was lower in lactose and easier for babies to digest. I thought a lower lactose formula might be better because Mike apparently had some sort of milk sensitivity based on how much he sneezes after drinking milk or eating ice cream or cheese.
We settled on Enfamil Gentlease. It’s supposed to have 1/5th the lactose of their regular formula. And it’s formulated to be gentler on baby’s tummy and help with gas and fussiness. I mixed a bottle for Noah last night when we got home and I immediately noticed that I had to shake it pretty vigorously to get the formula to mix well and not form clumps in the bottle. Even with the hard shaking, the bottle didn’t get the foamy bubbles in it like the regular formula does. The bubbles just sort of dissolved.
During the night last night, Noah had two big poops. And today, he had about 5 large poops within one hour. It was a fun day on that front, but Noah does seem to be feeling much better. I have my happy, easy going baby back.
I also wanted to try a new pacifier. Noah does not normally take a pacifier very well and I was wondering if he didn’t like the ones we had since they were not the same shape as the nipples he’s accustomed to. So I bought a package of those Soothies pacifiers – the big round blue-green ones. He does seem to like those better, but he still does not seem to need a pacifier to be satisfied.
Mike also did some research and found a new kind of gas medicine. It’s called Colic Care. It’s supposed to be all natural, FDA regulated and taste great to babies. The package said that it helps with gas and fussiness in babies. It even helps cure hiccups. We did not end up using the Colic Care last night since the new formula seemed to be helping so much.
But this afternoon when Noah had he hiccups for the 4th time today, I thought I would try a little bit to see it if helped. So I opened the bottle and it was this thin black liquid. The directions said to use a dropper and put the medicine between baby’s cheek and gums very slowly. I did this and the black liquid immediately came back out of his mouth and all over him. So I squeezed a tiny bit more. And again it came back out. And even though Noah swallowed virtually none of it, his hiccups immediately disappeared. Ha!
More Milk
On Thursday, I received my order of Motherlove More Milk herbal product that the lactation consultant recommended to increase my milk supply. I immediately went into the kitchen to take the first dose. I opened the bottle and poured the dose into a medicine cup and the smell was just horrible. The liquid was a dark brown, sorta like a cola color. And it smelled like funky maple syrup. So I drank it and GAG ME!!!!!! It was SO bad. I made Mike smell it later and he said it smelled like licorice. Yep, maple syrup and licorice and herbs. I have figured out that it’s not so bad if I add some Pepsi (which I don’t like) to it. At least it’s a little fizzy going down.
And the verdict? So far, I have noticed no increase in my milk supply. Bummer. As bad as it tastes, I was hoping it would at least work. And if you happen to run into me and think I reek of maple syrup and licorice, then I apologize in advance. I guess it could be worse. I guess. If I don’t see an increase by next week, I’ll call my ob/gyn and see if she can call in a prescription for me – something that really works. And doesn’t make me smell funny.
Perfect Lips And a Dimpled Chin? 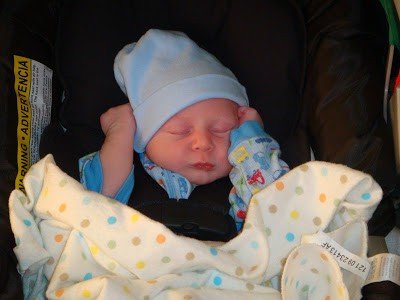