Today was the second day home alone with two kiddos. Thankfully, the night went better last night. It started out rough and I ended up being up with Noah for about an hour and a half, but then he slept for about 4 hours.

Emily was up before 7am again today, but I convinced her to lay in my bed until about 7:45am. She said “get up” at least 150 times, but I didn’t move. My strategy is to lay with my back to her so as not to encourage conversation.

Noah woke up while Emily and I were having breakfast. He was fussy and hard to settle most of the day. He took two decent naps, but fussed most of the rest of the day unless he was nursing. I’m thinking maybe he is going through a growth spurt right now? I don’t know. Babies are hard to figure out sometimes.

My shower even got interrupted this morning. Noah had been asleep in his pack and play for about 15 minutes and I told Emily to come get me if he woke up. Sure enough, as soon as I lathered up my hair she came in there and told me that he was crying. *sigh* Better luck next time.

As I mentioned last night, we had Meet the Teacher Night at school tonight. We went and found Emily’s classroom and her teacher will be Mrs. “B”. Emily was excited to find out that her friend Jayden is going to be in her class again this year. And their kindergarten class is going to have a pet frog. Emily was not-so-thrilled about that one. Emily wouldn’t tell Mrs. B her name either. She was being shy tonight and squeezing my hand really hard as we were talking to the teacher.

Noah did good while we were at the school. We put his carseat in the stroller and he just wheeled around like he owned the place. He slept most of the time. Emily’s teacher didn’t say anything about him, but the principal and the school secretary ooh’d and ahh’d over him and I heard a couple people comment that “he’s so little” as we walked by.

When we got home, Noah woke up and wanted to eat (again). After he ate, it was time for his nightly “Daddy Time.” Mike likes to sing to Noah. He often sings “Baby Blue” by George Strait.

This is a picture of Mike and Noah rocking and singing. My two handsome men! 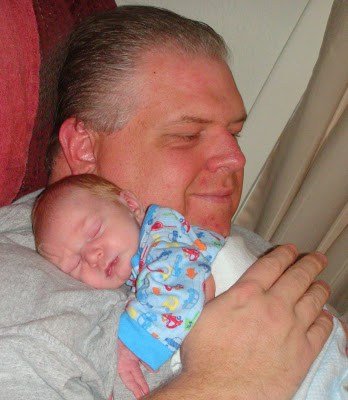