Skip to Content
And I could not be more thankful. The kids and I had a good day at home, but it was long and tiring.
It started with a long night last night. Mike made the comment this morning before he left for work that he thought I was up with Noah every hour during the night. I blew it off at the time, but the more I thought about it the more I think it was true. The only hour I am not sure about is the 3am hour.
If it was not one thing during the night, it was another. He ate twice during the night, had several diaper changes (but none involving an entire outfit change, thankfully), one false alarm with the Angelcare monitor (more on this later!!!), and several pacifier emergencies. All that added up to be a very long night for Mama.
Noah last ate from 4:45am to 5:30am, Mike left for work at about 6:15am, and Emily woke up and came into my room at about 6:30am. I convinced her to lay down in my bed so that I could doze until about 7:30am. Then Noah started crying because he had a dirty diaper, but after that he went back to sleep until about 9:15am.
After his “breakfast”, I sat him in his boppy seat for a few minutes and Emily laid down beside him to show him how to play her Nintendo.
At first, he looked a little scared … 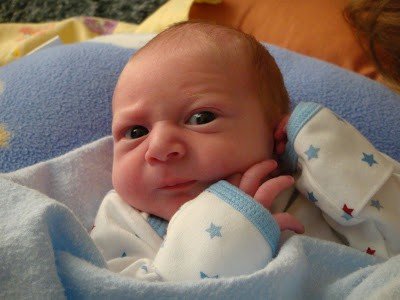 But then I think he was really getting into the lesson …

And then maybe a little bit back to confused …

But the two of them sat on the floor like this for probably about 15 minutes without much fussing at all. Noah seems to have a hard time sleeping after lunch time. It seems like he wants to sleep, but he just keeps waking up. I tried to keep him awake for a while after he ate, but that did not seem to work very well. Emily did not take a nap today which means I didn’t take a nap today either. She came out of her room at least 5 times during naptime. I was really really hoping she would cooperate with naptime today. I prepared her ahead of time for what was going to happen. Noah and I played in her room with her before it was time to take her nap and did a countdown until naptime. But still, she chose to disobey. *sigh* But even with the disobedience, this day was not a total loss. I managed to get a shower, do some laundry, and have dinner in the oven by the time Daddy got home from work. Dinner was some spaghetti pizza that Emily and I had pre-made and frozen. All I had to do was heat it up and brown it in the oven. But it was good! And even better, we have plenty of leftovers for tomorrow night. Tomorrow night we have “Meet the Teacher” night at Emily’s school. This is going to be a little difficult for me because I will have to get Emily and myself dressed by the time Mike gets home and somehow manage to have Noah’s feeding schedule match our schedule for the night. Good luck with that, right? My only saving grace is that Meet the Teacher night is open for a two-hour time period. So we’ll plan to get there when the doors open, but it’s okay if we’re up to two hours late. Ha! So that’s how my first day at home with two kids went. Despite the frustration, I would call the day a success. Now if I can just get some sleep tonight, we’ll be on path for a good day tomorrow. Wish me luck!