That’s right, I’ve never been this pregnant before. Emily was born at 37 weeks and I’m now almost a week and a half past that.

I meant to take a picture of my pregnant self tonight for the blog, but we had to go to the grocery store after work and I forgot about my plan until I had already changed my clothes. So maybe tomorrow night I can remember. I need to get one more picture before “D-Day” for sure. 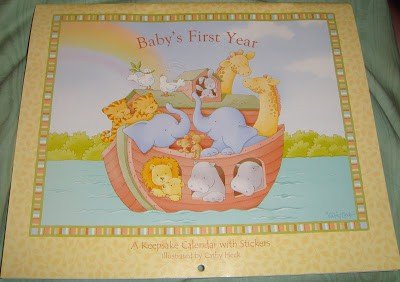 Several months ago when we picked out Noah’s baby book, we also purchased a First Year Calendar. It included some stickers to use to mark special events in the first year. It also included stickers with the month name and then I’m supposed to fill out the dates for each month.

I had been waiting to do this just in case Noah decided to come early. I had to be sure he was going to be born in August so that I would get the starting month right.

So Sunday was August 1 and I was so excited to be able to fill in the dates on the calendar. That night after Emily went to bed, I started filling in the dates. It took me a while, but I finally got all the months filled out. Then I started applying the stickers for a few of the major holidays – Christmas, Valentines Day, Thanksgiving, Easter, etc.

I got to Easter and didn’t know date it was in 2011 so I asked Mike to look up the date on the internet. He said it was April 24th, 2011. So I looked on my calendar and it COULDN’T be the 24th because the 24th was a Saturday on my calendar and I knew that Easter was always on Sunday. Mike checked again and said it was for sure April 24th. OH NO! I quickly realized what I had done. I used all dates in 2010 instead of going to the 2011 calendar starting in January.

OH MY GOODNESS I can’t believe I did that. I totally messed up a full eight months of my unborn baby’s First Year Calendar. What in the world was I thinking? Apparently, I wasn’t thinking.

So after I got over my error, I quickly went online and ordered a new Baby’s First Year Calendar. Oh yes. I did. I’m not gonna lie. I just couldn’t go back and white out all those dates. I think it was a $14 well spent.