0 shares
After our difficult day at home last Monday, Mike told Emily that he would buy her a whole banana split all to herself if she would listen to Mama and be a good helper the rest of the week.
On a side note – You might remember that we have our behavior chart on a dry erase board in the kitchen. Someone came to visit us this week and commented on all the red X’s that Emily had beside her name on Monday. It was really a hard day.
Since school started on Thursday, she also had to follow the rules at school and not get her color moved in order to claim her reward. They use a “light” discipline system in her class this year. If she stays on green, then she is displaying good behavior. If she gets moved to yellow or red, then she’s not following the rules and doing the right thing. They used a similar system last year in Pre-K and she never got moved off of green. We are expecting the same thing this year.
And true to form, Emily was much better the rest of the week. She earned her allowance every day this week besides Monday and she didn’t get moved off green at school.
So this evening, we took Emily to Braums for her banana split. I fully intended to take pictures of the dish before she started eating it, but it was already starting to melt and make a mess so I just let her dig in.
Her Dad had a great idea and gave her a straw to use to drink up some of the melted stuff. That worked a lot better than the spoon. And she eventually found the banana at the bottom of the dish. She enjoyed her banana split very much. You can tell because she has chocolate all over her face! She even shared a bit with Mama and Daddy. 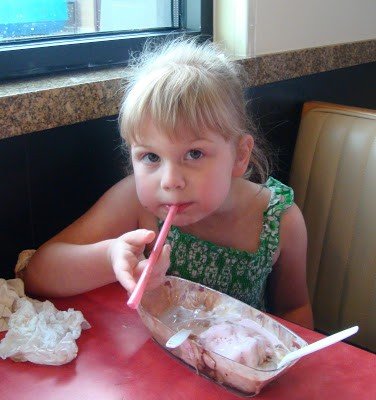 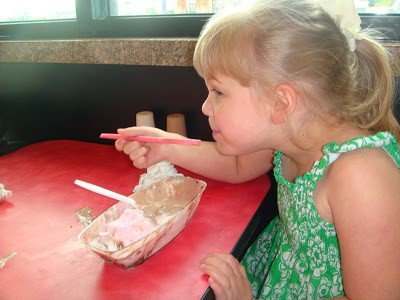 Tonight, Emily is spending the night with Nanny and Poppa so that she can go to Sunday School with them in the morning. We had been talking this up all week in hopes that she would agree to spend the night. And this morning, she confirmed that she would. But she made sure I knew that “she would come home tomorrow.” And she kept telling me that she would miss me. I miss her too!And you know this little cutie misses her too. He was napping in his pack ‘n play this afternoon and I caught him sleeping with his hand behind his head. When I nap in my recliner, I sometimes put my hand behind my head like that too. 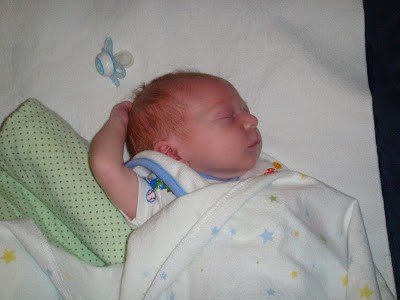 He wore a dinosaur onesie with some navy pants this afternoon. He looked like such a big boy wearing a shirt and pants instead of a stretchie/sleeper. He’s been wearing a knit hat when he sleeps at night and I think that’s so cute too. He’s pretty good at leaving it on his head. Now if we could just get him to leave his socks on …