This has not been a good week for me. It started off badly and that trend is just continuing.

I’ll give you the highlights.

On Monday – I had a flat tire on my way to work. I was at the gas station when I noticed the tire was very low so I was able to limp the car over to the air machine and air up the tire. Then my father-in-law helped me take my car to the tire shop.

The tire had a nail in it in such a place that the tire could not be repaired and had to be replaced.

It was early in the morning and the tire place was not busy so they were able to get me going again fairly quickly. I was “only” an hour and a half late for work.

Then on Tuesday and Wednesday, I can’t even remember what I did. I just know that my stomach hurt both days and I was just wishing they were over before they even started.

And that brings us to today. I was in a car accident on my drive home from work today. A lady pulling out from a parking lot onto one of the busiest streets in the metro area ran right into the side of my car.

The street is divided in that area – three lanes in each direction, plus a turn lane. I was driving in the center lane and the other car was pulling onto the street from a parking lot on the right. The right lane was clear so I thought she was pulling into that right lane. Well, she went a little wide and into my lane so I swerved to the left, but she still ran into the side of my car. Crash!

I pulled over to the side of the road and called the police. Then I tried to call Mike but he wasnt home. So I called his mom to let her know I would be late picking up the kids. While I was on the phone with her, the other driver got out of her car and came up to my car. It was a very old lady – according to the police report, she was 85 years old! I told her I’d called the police and they should be there in a minute.

So I was talking to Mike’s mom and watching the lady. I was sitting there and the wind blew some papers out of her hand. And she stepped into traffic to gather them up. OMGGGGG lady!! I think I even said something to his mom like “OMG I gotta go, this lady is gonna get herself killed!!!!!!!!” I forget exactly what I said, but that’s what I was thinking in my head.

The policewoman came and got our information. She asked what happened. And the old lady said “I thought I had room to pull out” and the policewoman said “Well, apparently you didn’t.” Hehe. I really think she was trying to pull across all three lanes of traffic. She eventually got a traffic ticket for the accident.

My car is messed up pretty bad on the passenger side. I am just soooooooo thankful my babies were not in the car with me at the time. The passenger side door will not even open. I took some pictures of the damage, but I cannot find my camera right now. Maybe I’ll post those pics another night.

So that’s how my week has gone.

Let us hope tomorrow is a better day.

And the real reason everyone comes to my blog … a picture for your viewing pleasure. 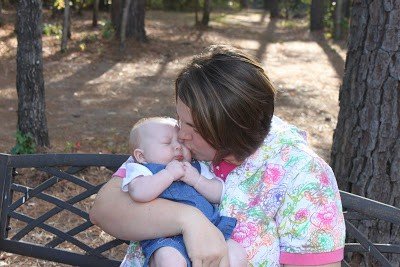 glad you are okay!!

Wow! What a week. I think you should take some time out for yourself on Saturday. Massage or mani pedi??? So glad you are ok.