Mike and I were both off work on Monday for the Presidents Day holiday.  Sadly, Emily had to go to school that day for a make-up snow day.  So that meant we all had to get up early and get Emily ready for school.  Since we were all up, Mike and I decided to go out to a breakfast date with Noah.
So we went to Cracker Barrel and had pancakes.  Noah slept through most of breakfast but he woke up as we were finishing up.  I let him have a tiny taste of my orange and he seemed to like it.
After breakfast, we stopped by Walmart and bought a bunch of prizes for Emily’s Reward Chart.  She has earned 22 stars so far so we thought we better get some prizes for her to choose from.  More on the prizes later.
Later in the afternoon, I was playing with Noah and I sat him down in Emily’s pink princess chair in the living room.  Emily’s Cabbage Patch doll Stephanie was sitting there so I picked her up and put her in the chair beside Noah.  I was laughing so hard, but here’s kinda how it went down. 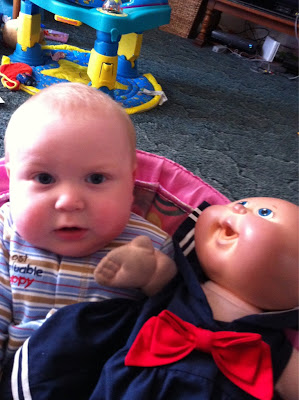 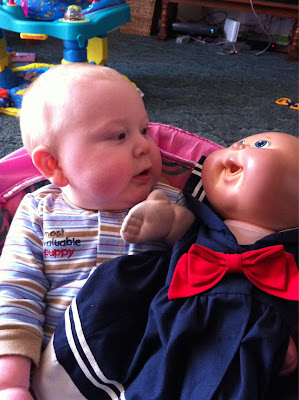 “Looks like fun, I can yank her around.” (And check out that raised eyebrow!!! Where does he get that from???” 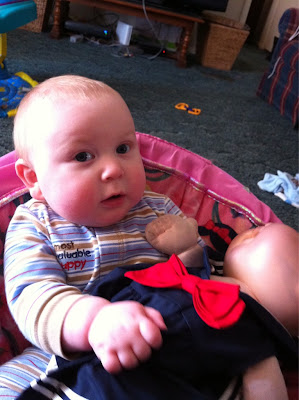 “Maybe I can throw her over my shoulder.  Nope, too heavy.” 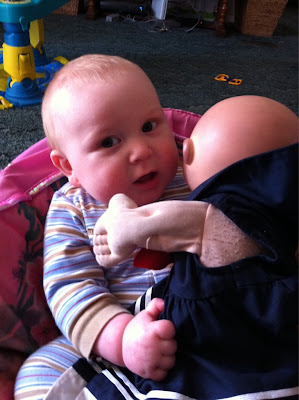 “Fine, then I’ll just push baldie down on the floor” 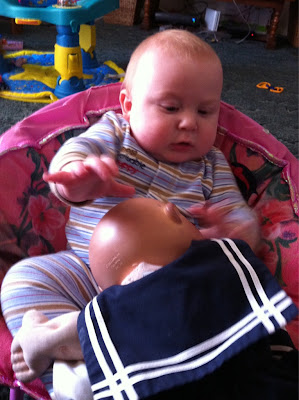 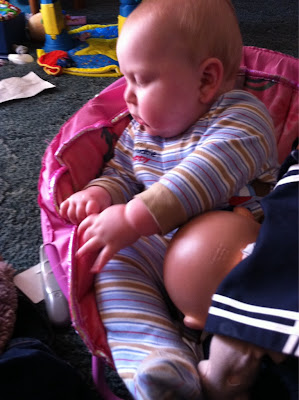 Poor Steph.  I showed Emily these pictures when she got home from school and she thought it was pretty funny that Noah was sitting in her chair and playing with her doll.  I don’t know if Steph thought it was funny or not.