This afternoon, I went out back to throw a bag of trash in the Big Blue. When I opened the lid, it smelled really strange and I thought I saw something in the bottom of the can. So I threw in the bag of trash and slammed the lid!

But I had to look again and see if I really saw something. So I opened the lid again to look. I thought maybe I could see an animal under the edge of the trash bag. Maybe a cat’s ear?

So I went to get a flashlight and looked again. I could not really see anything. So I reached in and pulled out the bag of trash. I looked again and a raccoon was looking back at me! Ack!!!!

Mike wanted to trap him in there and let him die or let the trash truck pick him up. But I couldn’t leave him in there possibly dying while I went about my business in my house.

So I went back out there and tipped the trash can over to let the raccoon out. I stood there the longest time waiting for the raccoon to run away. It finally started peeking out at me. 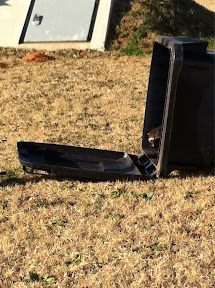 Then it finally ran off around the corner of the house. I walked around the house to make sure I ran off and was not messing with anything. 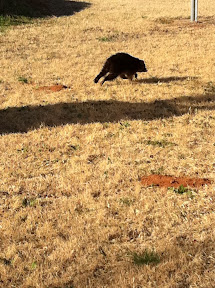 Then I went back to the trash can to set it back up right and throw away the trash. But there was another raccoon in it!!

I waited a long time for that one to run off. I eventually shook him out of the can and he ran off toward the well house. I could not tell for sure, but he might have gone under the well house.

So I did go back and set the trash can back up and secured the lid with some bungee cords.

And as I type this blog post, the raccoons are back and trying to get into the trash can again. They sure are persistent! But they are not getting any free food from us any more!

And where was Mike during this whole raccoon fiasco? He was standing inside the house at the kitchen window, laughing at me. Nice.