Yesterday afternoon, Mike made the best babyback ribs I ever ate. 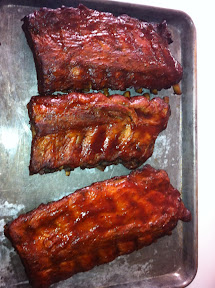 First, he rubbed plain yellow mustard on the ribs and then sprinkled them with Head Country rub.

Then he put them in the smoker with some good old hickory wood at 225 degrees for two hours.

Next, he pulled the ribs out and wrapped them in foil and put them back into the smoker for another two hours.

After the two hours were up, he took them out and unwrapped them. And put them back in the smoker to firm up and get some of that good bark on it.

At the thirty minute mark, he basted the ribs with some Head Country BBQ sauce. Then we just had to wait for the ribs to be done.

And then they were done. And they were so good. They were just fall-off-the-bone tender and so tasty with the Head Country seasonings.

We inadvertently ate about a half rack that night. Then we shared another half rack tonight for supper.

Do you want to come over for some ribs? You’re invited. (But call first! Haha.)

But just wait … You haven’t even heard what we had for Part 2. Mmmmmmm!