Yesterday was Noah’s first birthday. We had his birthday party over at Nanny and Poppa’s house on Saturday afternoon. A lot of our friends and family joined us to celebrate our little man.

We had a pizza party and lots of fresh fruits and veggies too. Then we had cake and ice cream and sugar cookies.

The cake was a marble cake made by our favorite local bakery. A few weeks ago, we took them one of the paper plates in the cowboy party theme and asked them to design a cake around it. On Saturday morning, Mike went to pick up the cake. While he was gone, I got a text from him that said “Cake looks awesome.” And when he finally got home with it, he was so right. The cake was awesome!!!!!!!! I think the bakery did a phenomenal job on Noah’s cake. 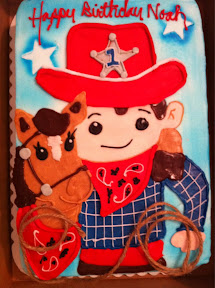 He got that cake in front of him and he pretty much knew exactly what to do. He just dug in with his hands and he ended up eating a lot more than anyone expected. 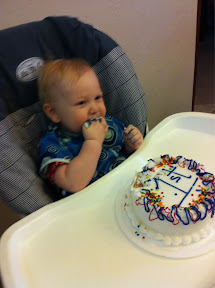 He was so sleepy by the time he started eating his cake, but he still did a good job. He was still sweet even when he was sleepy. 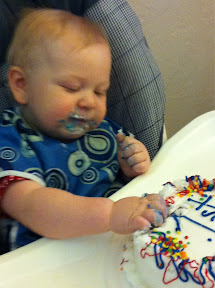 He also had lots and lots of presents to open. He got many new toys and some cute new clothes too. We have already played with all of his new toys.

I think one of his favorite toys is a little kid-powered ride-on car. It’s perfectly sized for him. So far, he has only figured out how to make it go backwards though. This evening, I was pushing him across the living room and then he would scoooooot back to me for another ride.

I want to thank everyone who came to Noah’s birthday party, especially the out of town guests who traveled to be with us. We had such a good time and enjoyed seeing all of you.

I’ll try to get Noah’s 12-month post up sometime later this week.