I’ve recently developed a condition called Bell’s Palsy.  This condition has caused one side of my face to be temporarily paralyzed.  According to doctors and what I have read online, this condition can last 1-3 months or longer.

I will admit that Bell’s Palsy is a very scary condition.  It seems like most people have heard of bell’s palsy or know someone who has had it, but not many people have had it themselves.  I have decided to share my experience so that I can remember it and hopefully it can help other people who are going through similar situations.

So what causes Bell’s Palsy?  It’s caused by inflammation in the facial nerve on one side of the face.  The inflammation is most likely caused by a virus that affects the nerve.

On the Thursday and Friday before I developed Bell’s Palsy, I had been sick with a cold.  I had a sore throat and earache, but only on one side (left side.)

On Saturday, I went to a clinic to see if I had strep throat or something.  The doctor diagnosed me with a sinus infection and gave me a prescription for some antibiotics.

Noah was also sick and was diagnosed with an ear infection that day.

I’m pretty much a wimp when it comes to swallowing pills so I asked the doctor for some liquid antibiotics.  After we picked up our prescriptions, we went home and Noah and I took our medicine and laid down for a nap. I slept for about 3 hours.

Later that night when we were eating supper, I noticed that my tongue felt numb.  I could move it, but the surface of my tongue felt very strange. I thought maybe it was something related to the liquid antibiotics.  Or maybe I was developing thrush?

On Sunday morning (I’m counting Sunday as Bell’s Palsy – Day 1), I got up and immediately hopped into the shower.  I noticed that a lot of water and soap was getting into my eyes.  When I got out of the shower, I noticed that my left eye was not blinking and that I couldn’t close it all the way.

So I got out my phone and googled “stroke symptoms”.  I felt fine, but my face seemed to be weak.  Almost immediately, I started to think I might have bell’s palsy.  I told Mike “something’s wrong with my face” and showed him how my eye wasn’t blinking.

We went ahead and went to Sunday School. We were having a birthday party for Jesus in our Sunday School class and I did not want to miss it!

Mike and I talked a lot about whether or not go to go the emergency room. I really didn’t want to go.  I was afraid the ER wouldn’t do anything and would just send me home.  We decided to wait until Monday and see if we could get am appointment with an ear nose throat doctor and save us a trip to the emergency room.


On Monday morning, I called around to several ear nose throat doctors but I quickly realized that I was not going to be able to get a same day appointment.  I also noticed immediately that it was much harder to talk because the left side of my mouth was not functioning.

After Mike took Emily to school, we headed over to the emergency room.  Thankfully, Mike’s parents watched Noah for us.

There was no waiting at the ER this day so I was immediately taken back to the triage area where they took my vitals and asked why I was being seen.  The nurse listened to my symptoms and then said “welcome to bell’s palsy.”  I said “I know. But I just want to make sure it’s nothing more serious.”  She said they would definitely do a CT scan of my head to rule out other things.

We were taken back to a room and we didn’t have to wait long for the doctor. He agreed that I probably had bell’s palsy but I would get a CT scan to make sure there were no tumors and no evidence of a stroke.  As expected, I didn’t have any tumors or a stroke. I had bell’s palsy.  The doctor gave me a prescription for a steroid and an anti-viral medication and lots of advice and sent me home.

The doctor said the main thing you have to watch for with bell’s palsy is problems with your eyes.  They can dry out and get ulcerated if not careful.  He suggested I get some eye drops to use during the day and some night ointment that I can put in my eye at night to keep it moist. He also said to tape my eye shut at night.

Here are a couple pictures of me in the emergency room.

Check out the eyebrows! 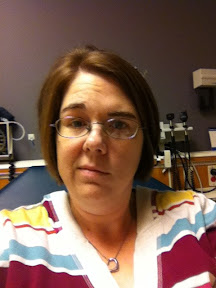 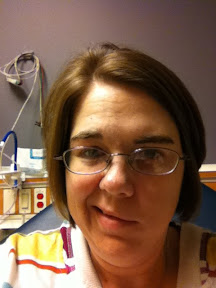 After we got out of the ER, we went to the drug store to pick up my new prescriptions and I got all kinds of supplies – lubricating gel eye drops, night eye goop, a pirate eye patch, stick-on eye patches, paper surgical tape for sensitive skin.

That night, I put goop in my eye and taped my eye shut for the first time.  I literally used the paper surgical tape and pulled my eyelid closed and put tape across it.  Maybe I was supposed to cover my eye with gauze first?