Well I wish I had different news, but my Bell’s Palsy symptoms have not really changed much. People keep telling me that I look better but my face is still paralyzed.

My pre-planned vacation from work ended a couple days ago and it has been an adjustment sitting at my desk at work all day.  My eye bugs me a lot during the day and there are times that I would like nothing more to just sit there with my eyes closed.  The worst part is driving back and forth to work.  My commute is about 45 minutes each way and it is a very precarious situation.  Sometimes my good eye seems just as irritated and unfocused as the bad eye.  Thankfully, Mike has been hauling around both kids in the morning and afternoon so that saves me an additional 30 minutes of drive time each way.

The other difficult part of going back to work is having to explain what’s wrong with me over and over.  Most people don’t ask.  I am sure they don’t know what to say.  Sometimes I don’t even bother to explain even though I can see the questions in their eyes. One of the cruel things about Bell’s Palsy is that it’s hard to say B and P words … like Bell’s Palsy.  Gah!

This deserves its own blog post, but I have started taking lots of vitamins and supplements – a good multivitamin including all the B vitamins, an additional sublingual B12 supplement, fish oil for the Omega-3, naproxen sodium (Aleve) every six hours for the anti-inflammatory properties.  I don’t know if this will help the paralysis go away any quicker, but I’m willing to try it.

By the time I get home from work, I want nothing more than to take a bath and go to bed. I was telling Mike earlier tonight that I wish my iPad had an app that would turn on my electric blanket without me having to get up and go in there.  Talk about lazy, right?

Thankfully, there’s only one more work day before the weekend.

Every few days, I make a cell phone video of myself trying to move my face in different ways – lifting my eyebrows, blinking, closing my eyes tight, smiling, puckering my lips. I like to compare it to the video I made on Day 1 (before I even want to the emergency room) to see if I can see ANY difference at all.  Even though people say I look better, the videos look the same to me.  My face still does not move.

I am wondering how long it took for other people to start seeing improvements?  I read something on the internet the other night that said if you don’t start having some movements within the first 2-3 weeks, your recovery could take longer.  This is not a good sign.  I sure hope that’s not the case.

I still only know one other person who has had Bell’s Palsy.  Most people know someone who has had it, but they have not had it themselves.  The statistic I read online said that 40,000 Americans get Bell’s Palsy every year.  That’s not many.  Less than 800 per state per year. 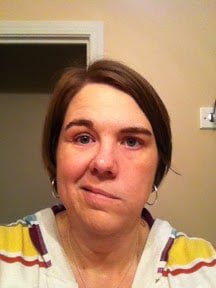 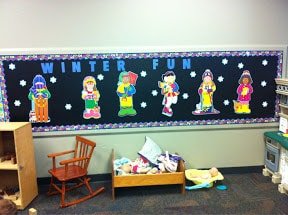 Jennifer...I am sorry you are suffering with this. I have not had it. A young man I know had it. He was 17 when he got it. He did start to see some improvement after a couple of weeks. And eventually all symptoms were gone. You get a lot of stares at work. Could you imagine being in high school with it? I will be praying for hour recovery to speed up. Love you.