This weekend, we took a trip up to Stillwater to visit my alma mater  – Oklahoma State University.  We found this awesome topiary cowboy boot over by the duck pond and Noah started doing the pistols firing with his fingers. Maybe he’ll be a Cowboy some day? This might be his first picture at his alma mater! 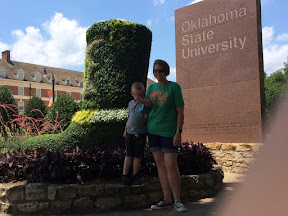 Before we found the campus, we had to find some lunch.  And when you’re in Stillwater, you gotta hit up Eskimo Joe’s for some burgers and cheese fries.  By the time we got there, Noah was HUNGRY.  We had to wait a few minutes for our table and he was not too impressed.  But we bought T-shirts so maybe that made up for it? 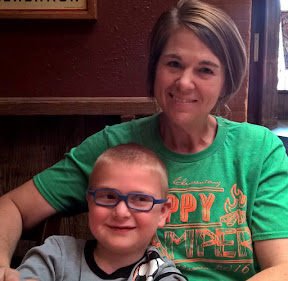 Mike likes to check in on Facebook whenever we eat at a restaurant, but for some reason the Sooner fan was not checking in to Eskimo Joe’s.  Hmmmmm.   So I thought I would be clever and check in and tag him in my post.  Except that he outsmarted me and had his Facebook settings such that it didn’t show up in his feed.  Oh well, he was there and here’s PROOF! 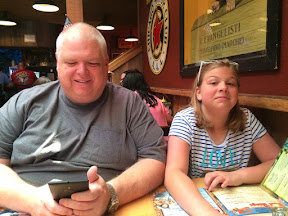 Our food was actually really good. I am not much of a burger eater, but I loved the burger.

When I lived in Stillwater, I remember going to Mexico Joe’s much more often than I went to Eskimo Joe’s.  My roommate and I used to go eat Mexican food a lot I guess.  I remember getting the chicken nachos appetizer as my meal. (Yeah, yeah I know! I am not that dumb now.)  I’d been talking about going to Stillwater to eat at Mexico Joe’s for months.  But we’d just eaten Mexican food the night before.  Bad planning skills right there.

After we ate (and after three trips to the bathroom!), we drove around the campus looking for familiar sites that I might recognize from my time in Stillwater.  The dorm that I lived in was torn down a few years ago so we did not look for that, but we did look for the off campus apartment that I lived in.  We never found it. Maybe my memory is not very good? Or maybe Stillwater has just changed a lot.

We did find the duck pond though.  We walked around and checked it all out. 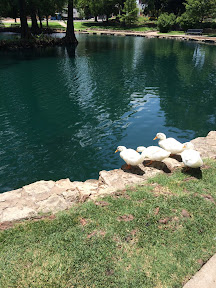 All the ducks were overly friendly.  I guess a few people feed them on the regular. 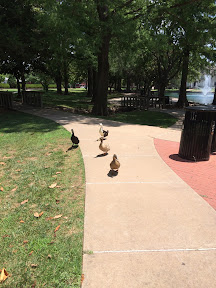 Noah was all into the ducks and wanted to get close to them. 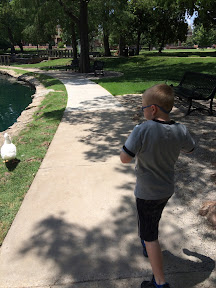 I don’t know why, but I kept feeling like Noah was way too close to the water.  #overprotective 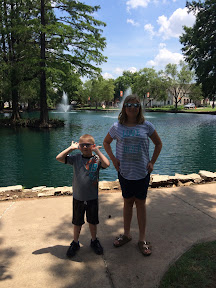 Seriously, the ducks were not even trying to get away from us. 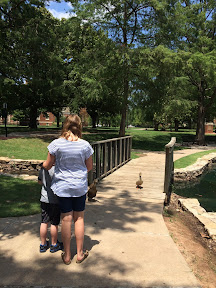 Finally got Emily to turn around and look at me for a pic. 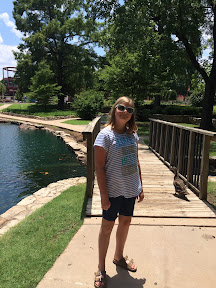 Noah was enjoying the duck point.  We saw some fish in the shallow water.  They were actually decent sized bass in there. 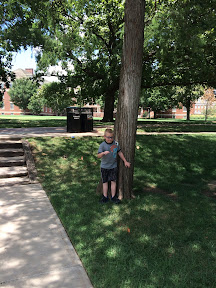 We also had to check out the gardens. 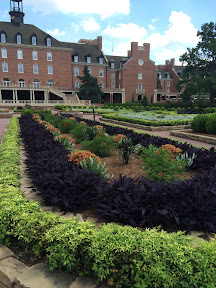 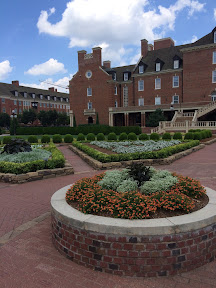 Maybe I should try to shape some of my shrubs into a cowboy hat, too? YES PLEASE! 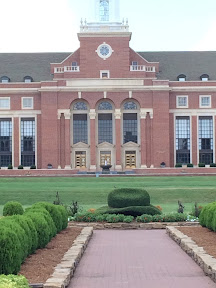 More about our day trip to Stillwater later.

Cowboy Noah loved pretending to be Pistol Pete and even after a few pictures Noah did not want to leave.