Noah has had a big weekend for his birthday.  He got to pick (almost!) everything.  I wish I’d gotten more pictures, but I always like to live in the moment and not behind the camera/smartphone.

The fruit pies were good. I made some with powdered sugar on top and some with icing drizzled on the top.  If you want, I’ll tell you how to make them.  But I probably need to make them one more time so that I can get some pictures for the blog.  I think my family will agree with this.  Ha!

On Saturday morning, we had to go pick up Noah’s cake and cookies from the bakery.  While we were out, we went by the party store to get some soccer balloons for the party.  But when we got there, Noah decided that he wanted a Thomas the Train balloon – the huge kind that is weighted so that it walks/floats close to the ground.  The thing was $25!  But it was his birthday so I let him have it.

Noah wanted to go to McDonald’s for lunch so we stopped by there on the way home from our errands.  When we got home, Noah took his big shiny balloon inside the house while we were unloading the car.  And within about 5 minutes, the $25 balloon had been tossed up into the air and it hit the ceiling fan and got a huge hole in it.  *sigh*  Cue the disappointment.

Later in the evening, we had some family over to help celebrate Noah’s birthday with pizza and a party.  I thought his cake and cookies were super cute.  And, as always, they were quite delicious, too. 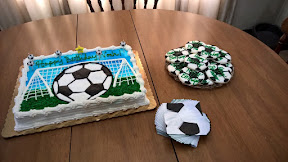 For some reason, the bakery gave me more cookies than I even ordered.  Can’t complain about that! 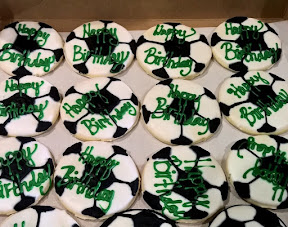 Noah was acting all scared when I was trying to light the candles.  I guess he’s taken the lessons on fire safety to heart because he didn’t want to get near it. 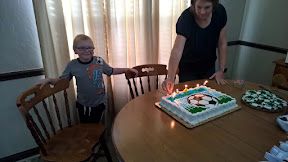 Noah got a lot of fun toys for his birthday.  This is actually his 2nd birthday party. He had another party during Cousin’s Week last weekend and got more fun toys.

He’s really been enjoying the Playmobil toys that he has.  He has been wanting this police station for a while now.  He’s excited to add it to his community. 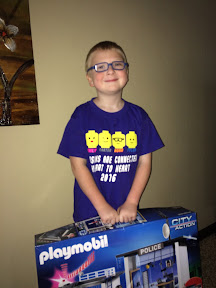 And how cool is this?! He got a Snoopy Sno-cone Machine!  Did you have one of these as a kid?  We haven’t made any sno-cones yet since we have so much cake and cookies, but we’re going to do this very soon. 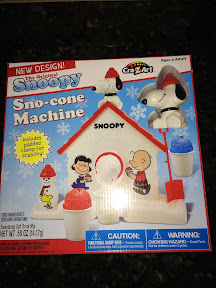 Cute Birthday! Love the cakes, cookies and the birthday boy!!!