I hope you all had a great Labor Day weekend!  We decided that we were going to take an impromptu road trip.  We left after church on Sunday and headed down to Texas for a couple days.

I Googled a lunch place on my phone while we were heading down the interstate.  We ended up at Deiter Brothers BBQ in Lindsey, TX.  I got the loaded baked potato with brisket, which is pretty much my go-to BBQ meal. It was really delicious.  Everybody enjoyed their meal.  Mike asked if this place was better than my favorite BBQ place in OKC and I had to say YES. 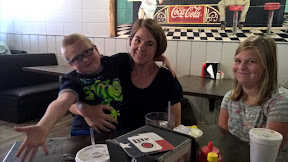 Then we were off to our first stop on our family adventure – Sandy Lake Amusement Park!   This is a family park in Carrollton, TX.  When you drive in, you pay $2.00 per person at the gate then you drive in and you can park anywhere.  Literally, you drive down into the park and they have a bunch of picnic tables at different spots under these huge trees and you can just park anywhere and just go have fun.

The park had a family feel to it. It was not too big and not too small.  They have a lot of carnival rides like what you would see at a county fair.  It really took me back to when I was a kid and we spent a lot of time at the fairs when we were showing our cows.

Noah was a big fan of the bumper cars and the pony ride.  We did the bumper cars a couple of times.  Much to his disappointment, Noah was too small to drive the bumper cars so I had to drive with him.  He literally kept grabbing the steering wheel from me and crashing us into people.  haha!  Emily drove her own car and she did not like it when Noah and I ran into her.  She was really offended by that. 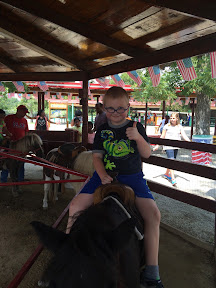 It was a hot afternoon on Sunday, but they had a lot of big shade trees to help keep us cool.  We also had rainbow snowcones to cool us down. 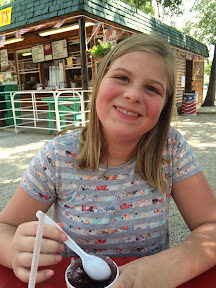 One of the main reasons I wanted to go to this park was because they have my favorite carnival ride – the Tilt-A-Whirl. I was so excited for the kids to ride this with me!  We all rode it together and I taught them how to lean one way or the other to keep the car spinning around.  We were all screaming and having a good time.

The Tilt-A-Whirl was a 5-ticket ride, but it did not take us long to go on the ride again.  The second time we rode, I gave the ticket guy 15 tickets for the three of us and he handed Emily five of the tickets back.  And when the ride was over, he asked if we wanted to ride again but I said we would later. 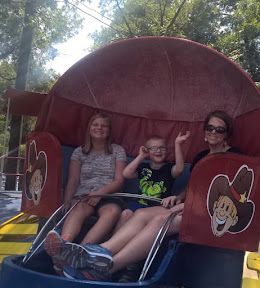 Then we went over to the pond to ride the Paddle Boats. I knew Noah would love this.  The paddle boats could take three people at a time – two people peddling and one person in the middle riding along.  Noah was pretty disappointed that he couldn’t paddle the boat.  It was HOT out on the lake though.  There was not a lot of shade.  We didn’t quite make it to our 20 minute time limit, but it was still fun.

After the paddle boats, Noah was pretty much done so he and Mike went back to the van to cool off and Emily and I went back to the Tilt-A-Whirl one more time.  I only had two ride tickets left so I went and bought 8 more.  Emily and I discussed that there was a good chance the ride operator would give us back half the tickets and then we could ride again.  But if not, that was fine and we’d be happy with one more ride.  But when we got to the Tilt-A-Whirl, we each had our 5 tickets in our hand.  He wouldn’t take mine and he wouldn’t take Emily’s.  So we rode and had a wonderful time!  Then the ride ended and he asked if we wanted to go again and we said YES!

Emily likes to point out that I was really sweaty and she’s right.  But I loved it and I was having a great time. 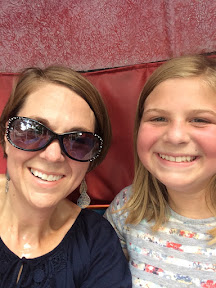 After the Tilt-A-Whirl, I tried to convince Emily to ride some of the other rides with our extra tickets.  The Spider?  No way!  We’d ridden that earlier and she thought she was going to have a heart attack.  The Scrambler?  No!  The Swings? No!  So we just handed our extra tickets to a random person on our way back to the car.

We left the amusement park and headed for our hotel, which was about 45 minutes away.  That night, we went to eat at In-N-Out Burger (P.S. Why do they not have mayo?  Not everybody wants their “spread”.)  Then we went over and grabbed dessert at Curly’s Frozen Custard.

After dessert, we went back to the hotel for a little family swim.  We had the whole pool to ourselves most of the time so it was a lot of fun.  Both of the kids loved it.

And that was the end of our first day of our Labor Day Adventure.  Come back later this week to find out what else we did on our trip.