Our Labor Day Adventure continued on the second day with a trip to Dinosaur World! Did you know that such a thing even existed?!  This park is right outside Dinosaur Valley State Park in Glen Rose, Texas. 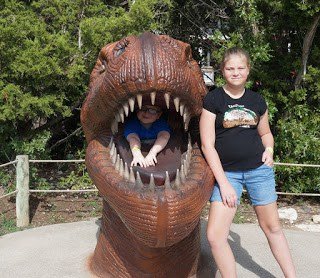 We got an excavation package that included a fossil dig and a gem mining pass.   At the fossil dig, the kids got to dig into the sand to find fossils, shark teeth, etc.  They got to pick their three favorites to bring home. 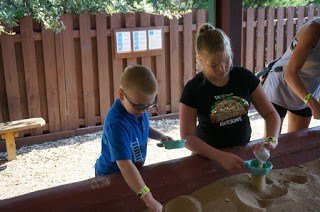 I didn’t get any pictures at the gem mining center because I didn’t want to get my camera wet, but the kids got a lot of gems in their bags. Noah wasn’t much into the gems, but Emily has a pretty extensive rock collection so she loved seeing all the gems she got.
Dinosaur World also has a really nice playground for the kids as well as a Bone Yard where they got to use little brushes to uncover bones in the sand. 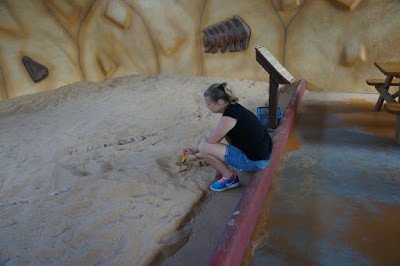 We didn’t have a lot of time to play on the playground, but they had some really cool things like this dinosaur skeleton.  Noah was a fan. 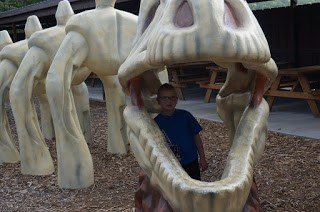 They also had a museum with some real dinosaur bones as well as some Animatronic dinosaurs.  These things were moving and squawking at us.  Noah was scared at first, but then he was okay after we told him that they were robots.  I thought it was pretty cool. 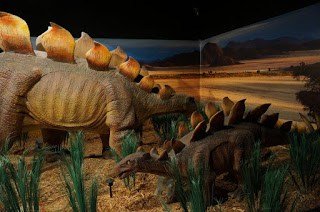 Dinosaur World also has a walking trail with life-sized dinosaur statues all along it. 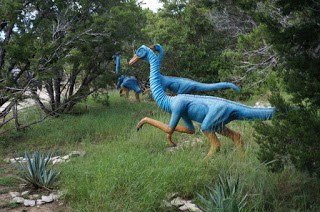 Emily was acting scared with the Tyrannosaurus Rex statues, but Mike and I called foul on that one. Obviously, they’re statues like all the others. 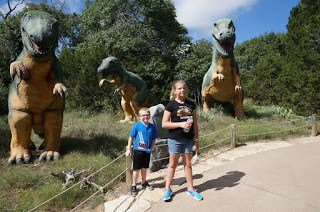 This was a familiar site on the trail.  This little guy was all too confident to go out exploring on his own. 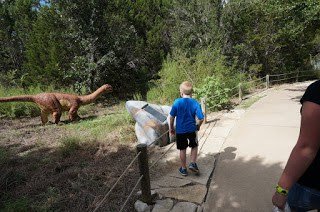 At the halfway point in the trail, there was a pond with these big Koi fish in it.  We’d bought some fish food so we walked out onto the dock to feed them. 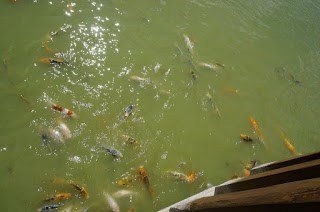 The kids loved feeding the fish. 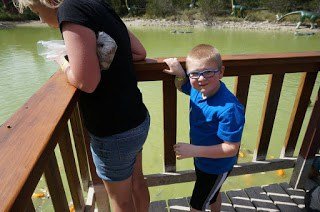 They also had some dinosaurs along the banks of the pond and some Animatronic alligators in the water.  Pretty cool. 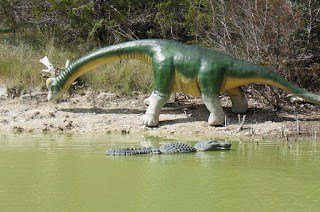 Overall, I thought Dinosaur World was a really fun stop on our trip.  We spent maybe a couple hours there and it was well worth the visit. 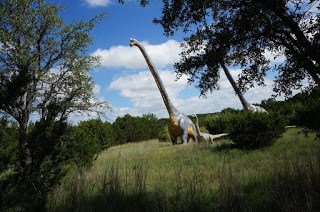 I’d wanted to go to Dinosaur Valley State Park to see the dinosaur footprints, but we really didn’t have time.
And speaking of time, I’m out of time for blogging tonight so you’l have to tune in later this week to see what else we did on our trip. It was definitely a fun one!
Click here to cancel reply.