Today was field trip day for Emily’s class! They went to Frontier City, which is a local theme park. I went along as a chaperone. 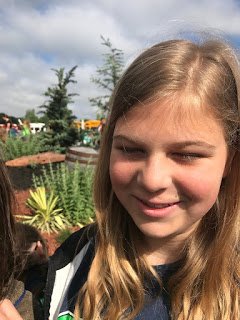 There were 7 girls in my group. We all had a good time. One of the hardest things was trying to keep up with everyone when some girls did not want to ride the same rides as the others.
I took quite a few pictures, but I don’t have permission to post pictures of the other kids online so I had to crop some of them out of the picture. 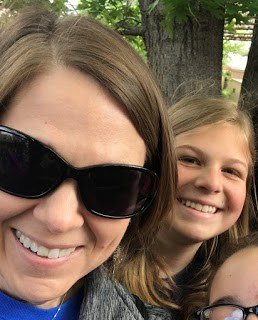 One of the rides we found was The Tornado, which is the Tilt-A-Whirl!  I rode it twice. I think Emily rode it three times. I love that ride. It was a lot of fun.
Some of the girls were wanting to ride the Silver Bullet, which is one of the big rollercoasters. We headed over there and when we got close we realized that the line for the ride was very short, in fact non-existent. It took me a second to figure out what was happening, but the ride had gotten stuck at the top and the fire crews were there rescuing people off the ride! 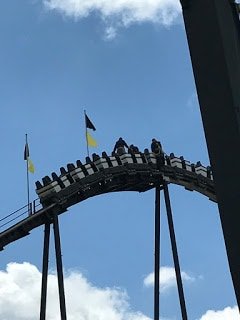 They were like 80 feet up in the air or something crazy like that! The news helicopters were circling overhead and broadcasting the rescue live on the TV and internet. It took them about 2 hours to get everyone off the ride.
Thankfully, none of the kids from our school were on the ride at the time and everyone made it off there safely.
Since we were not able to ride the Silver Bullet, we kept walking and eventually found the water rapids ride. We got sooooo wet! I guess that’s the point of the ride, but it was cold out there today and we were very wet. But this amusement park has a full-body heated dryer that you can pay to use. We all get into it together and tried to warm up a little bit. When I got home a couple of hours later, my clothes and shoes were still very wet.
It was a good field trip and a lot of fun. I hope it’s something that the kids will remember for a very long time.
Click here to cancel reply.