You guys, I can’t believe we’re already at the last day of school! The time is just going by so fast right now. Before you know it, the summer will be gone and we’ll be back to the school routine. But for now, I’m going to enjoy this transition to summer and the slower pace of life. 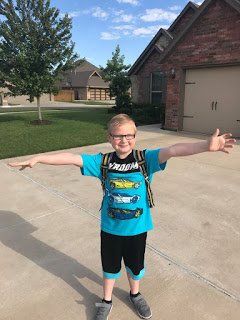 The kids have had a lot of fun activities at school this week. Tuesday was yearbook signing day. I didn’t get a yearbook until I was in junior high. But in 2017, kids get to buy yearbooks for every year of their life.

Wednesday was Emily’s park day/cookout field trip. Her class also had a visit with some Extreme Animals. Emily said she got to pet an alligator. Noah had his awards assembly in the afternoon.

Today was the official last day of school as well as the annual talent show.

Emily played the same song she played at her piano recital, “Silver Moon Boat,” and I thought she did really well.  The Youtube video is below.

There were really a lot of talents showcased at their school today – lots of singing and dancing, several piano players, a violinist, a traditional Native American dance, and a girl who danced in a pillowcase. Yeah, I don’t know either, but that one was pretty funny. I’m sure she didn’t just come up with that whole gig just for this talent show, but I can’t think of any other time or place you’d do something like that.