Skip to Content
Sunday was Noah’s 7th birthday. We celebrated with family and friends on Saturday night with cake and ice cream.
For the last several weeks, Noah has been telling us the wanted a specific Willy Wonka cake that he found on YouTube. It was a really fancy and complicated cake, but Mike kept saying that if anyone could make this cake it was me and Emily.
I think it turned out pretty good. The cake was a nine-layer white chocolate mud cake with vanilla buttercream between the layers. It was covered with chocolate ganache then decorated with colored fondant. 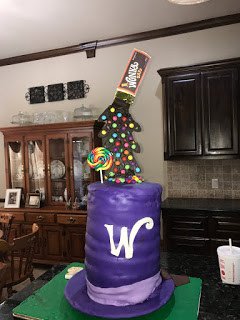 Back of cake with the chocolate waterfall 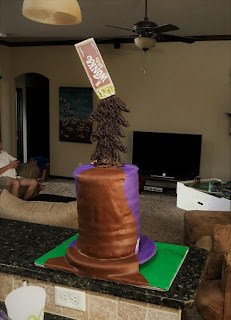 Inside of the cake with nine rainbow-colored layers. And all that delicious buttercream. I mean, it was really delicious, homemade, decadent buttercream. 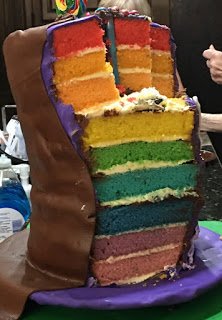 We also made some fizzy lifting drink. At first, Noah wouldn’t drink it because he didn’t want to be lifted. But he finally tried it and he loved it!
Isn’t he sooooo handsome?? 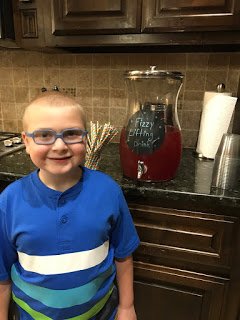 And of course, we had to have plenty of candy at a Willy Wonka party.  It was a fun party and Noah was so excited to have his family and friends with him to celebrate. 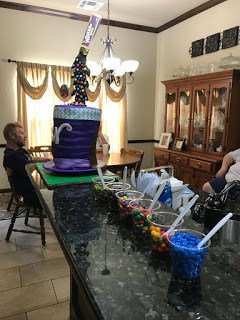 Noah got a lot of fun presents. He loves art and he got a lot of art supplies. He also got some Lego sets that he and Emily have already been working on building. I wish I had some pictures of him with his presents. Mason got him a pirate belt and sword that he loves wearing every day. He also got his very first piggy bank with Noah’s Ark painted on the side. Sunday was Noah’s birthday and he was also baptized at church on Sunday morning. What a special event to happen on his 7th birthday. We are so happy for him and proud of him!