This week started off with some President’s Day Adventures with Grandmother and Granddaddy. We had a whole lot of fun and even got a few projects done while they were here. They left on Tuesday morning, about the time all the bad weather came rolling in.
We’d been dry for months but here came the rain – freezing rain, that is. Schools were out on Wednesday and Thursday because of the weather. I still had to work, but we still got to have a little fun cooking and watching movies.
The weather was better by Friday and the kids were back at school. It still rained quite a bit but at least it wasn’t cold enough to freeze. Noah got to go to a pizza lunch on a party bus because he sold enough items at the school fundraiser last fall. He said they watched a movie and the bus had minions inside and outside. He had a lot of fun. Thanks to everyone who bought things from his fundraiser! 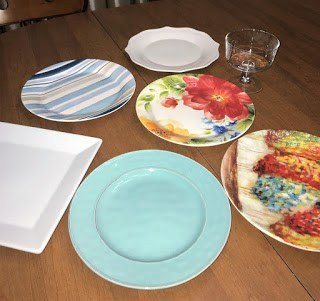 This afternoon, Emily and I went on a little shopping trip to try to find some plates to display the food that we feature on the blog. I was pleased with all the different types of plates we found. We went to several places but all of these came from Pier 1. And most of them were on clearance.  I love all the different colors.
When we were checking out, the lady at the checkout counter said she was curious what we were going to do with all the different plates and I told her that I was going to use them to take pictures of food. She said that the bright colors might overpower the food on the plate then she told a story about when she was getting married. She said that when she was picking out china, she’d found a beautiful, bright floral pattern but her mother told her to get simple, light-colored plates because that would make her food more appetizing. She said she hadn’t even thought of that. She was just thinking about how the dishes would look in her china cabinet.
Another lady standing at the checkout asked if I was a caterer and I said no, I just take pictures of the food and post it on the internet. The ladies did not understand what I was doing at all!
I got six of the little parfait glasses in the picture above. They are so cute! They’re exactly what I was looking for and they were also on clearance at Pier 1. I’m using them for tomorrow’s dessert. More on that another day.
Tonight, we decided last-minute to go out to dinner. We wanted to go to our favorite pizza place, but their waitlist was too long. We went to a local Italian bistro instead. 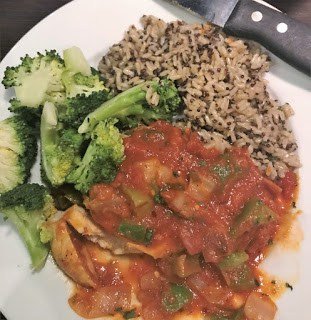 I ordered one of their lite menu options, the chicken cacciatore. It wasn’t bad. The chicken was really tender. I thought the brown rice and quinoa medley was pretty good but I wished the broccoli was cooked a little more. 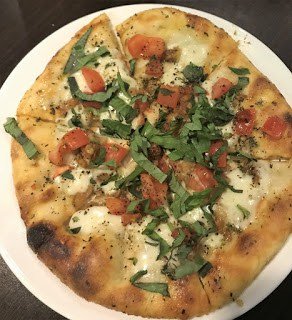 Emily and Mike both had pizzas. 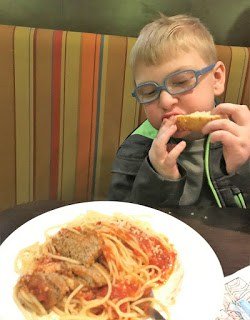 Noah has “sketti and meatballs.” He wanted me to take a picture of his food too, but I took a picture of him instead!
Looking forward …
We’re planning to have vegetable beef soup and cornbread after church tomorrow. I’m also making a special dessert. I’ll be sure to fill you in on that tomorrow.
We have several birthdays in our family this week – Happy Birthday to Heather, Carter and Mason!
I’m looking forward to the warmer weather this week. I think my daffodils are looking forward to the nice weather too. They spent this week frozen over and I don’t think they were too impressed. This is the first year I’ve had daffodils since we moved to this house four years ago and I can’t wait until they start blooming. It won’t be long. 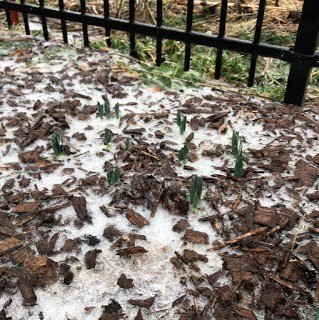 I'm loving the plates and glasses!!!