0 shares
Last night, we went to Mason’s Pirate-themed 12th birthday party. Mason has always been a huge Pirates of the Caribbean fan. Even when he was a kid, he would carry around a straw as a sword. He also had a Captain Hook cake at one of his past birthday parties. I even have a picture of it! I also found this picture where Mason is carrying around one of his infamous straws when he was a kid but this time it was a “wand” instead of a “sword.” 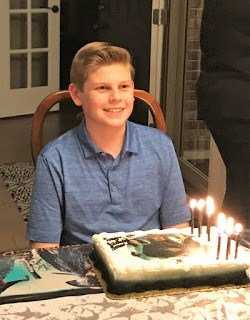 Mason had a feast fit for a pirate. I wish I’d taken more pictures of the food because it was all set up so cute with these labels. One of them was (gold)fish and chips. Another one was golden (chicken) nuggets. 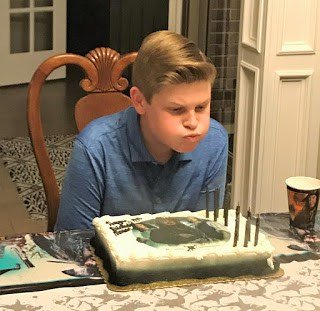 Mason’s cake was really neat with an edible image on it and buttercream frosting. YUM! There was also ice cream and cupcakes.
We had a fun evening celebrating Mason’s birthday and visiting with everyone. Can’t wait until next year when he’s a teenager! Eek!
Click here to cancel reply.

Such a fun party!!