Skip to Content
This evening, we went to Noah’s school play. His class performed Seussical the Musical for a very crowded audience of family and friends. Nanny met us for the performance.
The play was really cute. Noah tried out for a speaking part, but the teacher had so many kids who wanted to be on stage that she just drew names. Noah didn’t get a part but he was in the chorus. 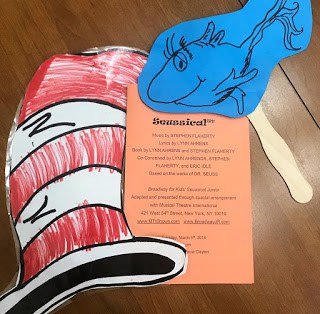 All the kids colored their own Dr. Seuss hat. I thought Noah did a really good job with his hat. And of course, he picked a blue fish. 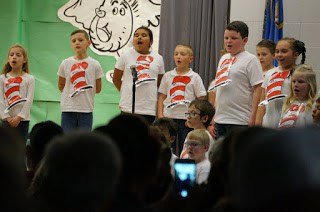 I got stuck on a work call this afternoon and we ended up barely getting to the school on time so we did not get a good seat. Once the play started, I could barely see Noah because he was standing on the bottom row. Whenever the chorus would start singing, a dozen people in front of me would get their phones out and start recording or taking pictures. Every time I would get my camera focused, someone else would put their phone up in front of me. I’m sure I was doing the same thing to the three rows of people at the very back of the cafeteria too. Haha! 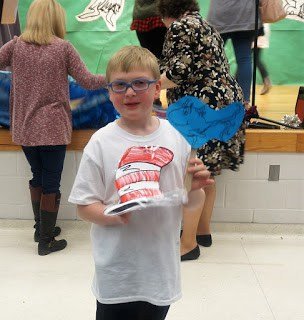 After the program, the music teacher let the kids go get a cookie. I got to get a couple pictures of Noah in front of the stage. He was distracted by all the people and not standing still so I didn’t manage to get a good picture but he is so cute anyway!

I know he had so much fun performing and we could not be prouder. Good job Noah!