Our Spring Break Adventure continued on Tuesday when we headed to Smackover to visit the Arkansas Museum of Natural Resources. We got there right after lunch because we wanted to do light painting, which started at 1 pm. The lady asked if we’d called in advance to register for the light painting because the class was full, but we hadn’t. We didn’t know we needed to, so we set off looking around the museum. 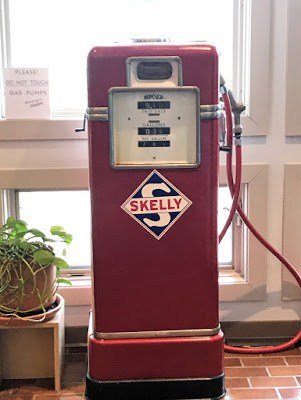 In the lobby, they had some gasoline pumps on display as well as some interactive exhibits about health, portion sizes, fitness, balance, and flexibility. 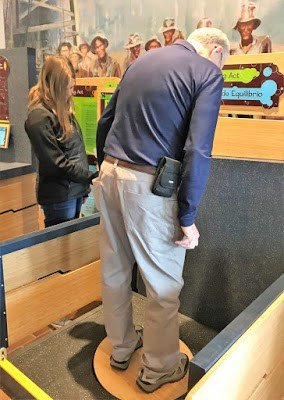 Granddaddy and Emily tested out the balance board. We all got a turn but Emily and Noah were the best at it. 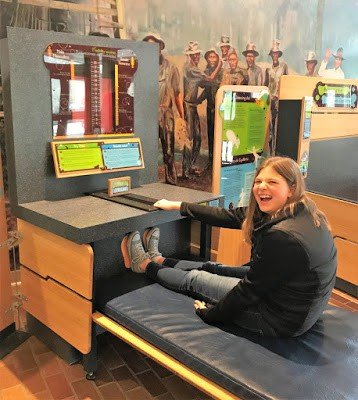 I’m pretty sure everyone cheated on the flexibility test, but Emily scored really well on it. 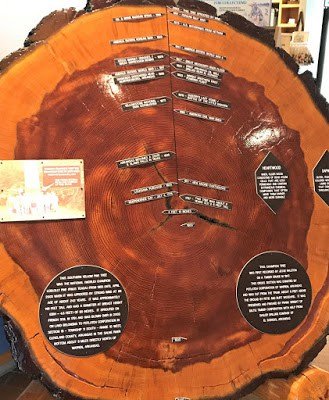 This giant cross-section of a tree trunk was in the lobby by the information desk. It was HUGE! 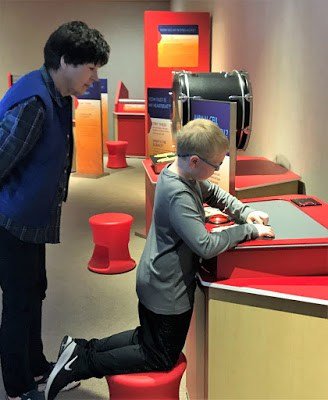 Another room had a lot of interactive exhibits about the human body. They had a light table with a bunch of x-rays of different body parts that you could mix and match to make a skeleton. There was also an ultrasound similar that would show you either one baby or twins!
The drum on the wall behind Noah was for listening to your heartbeat. You put your hands on the sensors and the drum would beat along with your heart. We all had very irregular heartbeats but some other kid walked up and put his hands on the sensors and the drum started beating in perfect rhythm. Maybe it was just us? 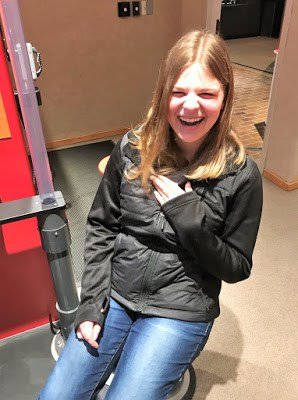 One of the things that Emily and Grandmother liked in this room was the fart noise machine. I didn’t get to try it out but you sit on these little stools and it makes farting noises. There was a whole lot of laughing going on while they were playing with the fart machine.
When we got finished in the body room, it was almost 1 pm so I went back to the desk to ask if they’d had anyone who didn’t show up for the light painting so that we could participate. The lady said, “Sure, we can always make room! Just follow the signs.” Wow, why didn’t she say that when I asked 10 minutes ago when we first walked in? 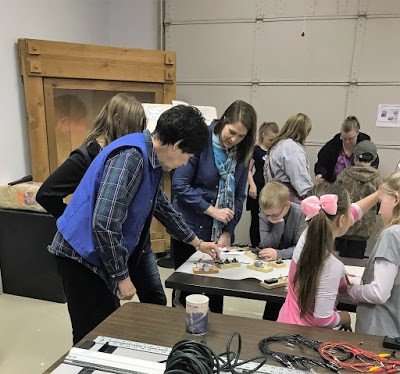 We went into the activity center but the room with the light painting was pretty full so they had maybe 15 people go out into the entryway to do other activities while the first group was doing the light painting. We got to put together some circuits. 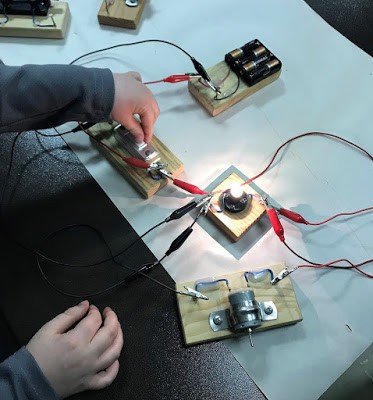 We got ours working where the switch would operate both the light bulb and the motor. It was pretty cool and I thought we had great teamwork. Noah’s favorite part was obviously pushing the button on the switch.
After we got finished with the circuits, we went to the light painting. It was very cool. They took some pictures of us making patterns with colored flashlights and strands of Christmas lights in a dark room. They were supposed to email us the photos they took, but I haven’t received them yet. If they ever send them, I’ll be sure to share. 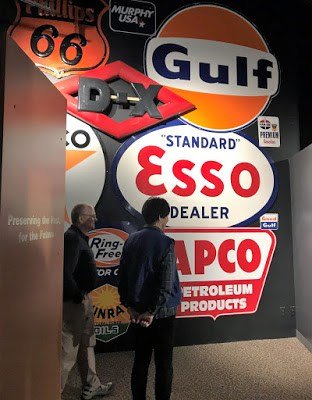 After the light painting, we went back to check out more of the museum. They have an indoor replica of the town of Smackover during the oil boom in the 1920’s. It has some vintage vehicles, kerosene tankers, and different buildings and offices along the streets. 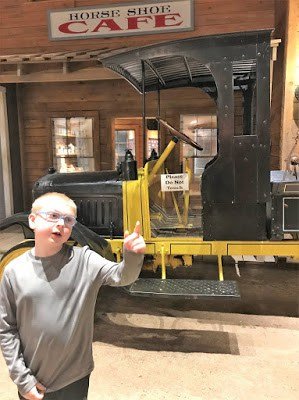 This old car was parked in front of the cafe on the street. Noah was actually pointing to the theater that was showing a black and white film. Some of the offices would have voices talking when you walked in and that freaked Noah out completely. He was ready to get the heck out of there. He was also wary of going into the jail cell for some reason. 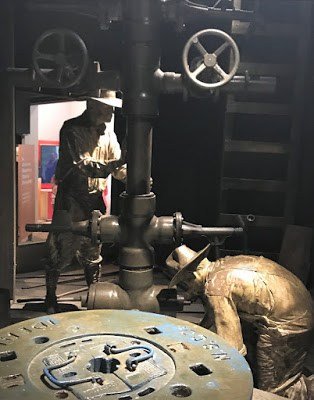 One area had these oil men hard at work. 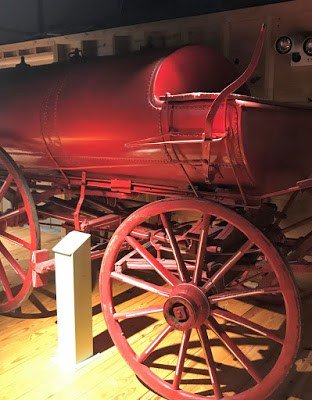 We went up the stairs and they had this bright red kerosene tanker on display. They also had a kerosene dispenser that was pretty neat. 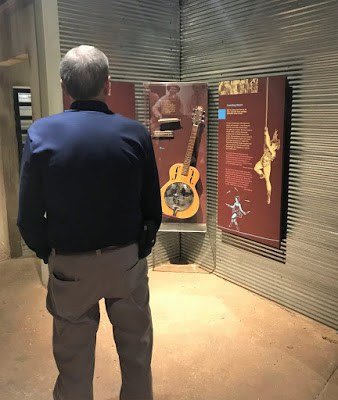 I thought it was neat to see different items they had from that time period. A lot of it was related to the oil boom but they had some other things too, like this guitar. 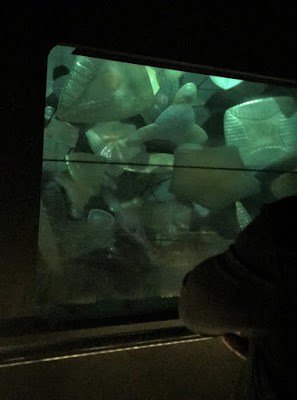 We were getting ready to leave and Noah found this elevator that shows you how oil is made under the earth. We rode up then had to walk all the way back through the town to get back out.

As we were leaving, two kids were playing in front of this skeleton screen. Whenever they moved, the skeleton on the screen moved too. After they left, Grandmother and Granddaddy got a turn.
Check out these videos!

Would you visit here again?

Yes! It was a fun stop on our Spring Break Adventure. I thought it was great that the museum had so many interactive exhibits for everyone to enjoy.

Favorite thing about the trip?

Noah: Everything!
Emily: The balancing station in the lobby.
Jennifer: Getting to play with the interactive exhibits.

The gas pumps that are on display in the lobby make a great prop for a photo. Also, there is a wall of old signs that is pretty cool. And the vehicles in the old town area would be a neat place for a picture.

If you’re wanting to participate in any of the special events, be sure to call ahead to reserve a spot. The museum is pretty much halfway between Camden and El Dorado and there’s not much else around it so plan accordingly. There is also a walking path and a picnic area outside if you want to bring your lunch.