The third part of our April Adventure was a visit to the Sharkarosa Wildlife Ranch in Pilot Point, Texas. We got there right after lunch and there was a line to get in. By the time we bought our tickets, the earliest tram ride reservation we were able to get was at 2:30 pm, so we had plenty of time to explore the park before our turn on the tram.

We purchased some animal food so we headed over to the petting zoo to see if any animals were hungry. I’m not sure how hungry they actually were but a lot of the animals were wanting attention. 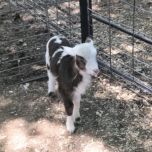 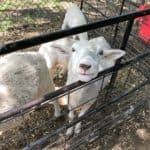 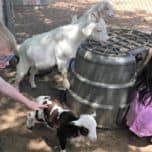 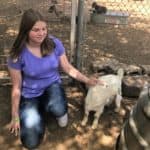 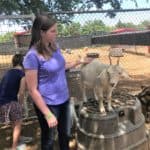 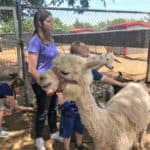 Llama at the Petting Zoo 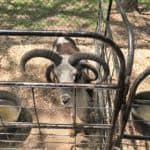 Some of the animals in the petting zoo area were in separate pens. You could still pet them but they were not able to roam around the area like the goats and some of the other animals could. 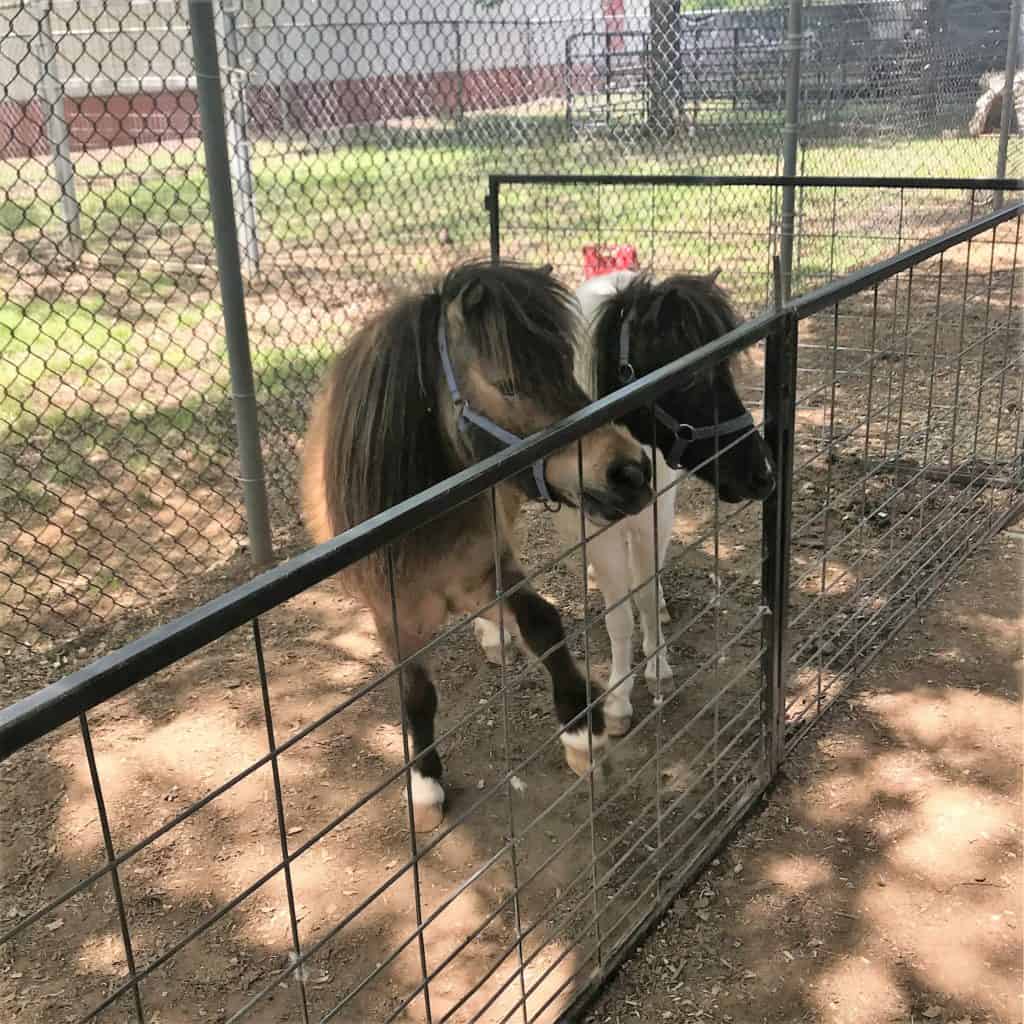 I don’t know if you can tell what’s going on in this picture, but the horse with the dark legs kept hitting the fence with his hoof over and over to try to get our attention so that we would give them some food! Talk about passive aggressive! I definitely sensed an anger problem with this little guy. 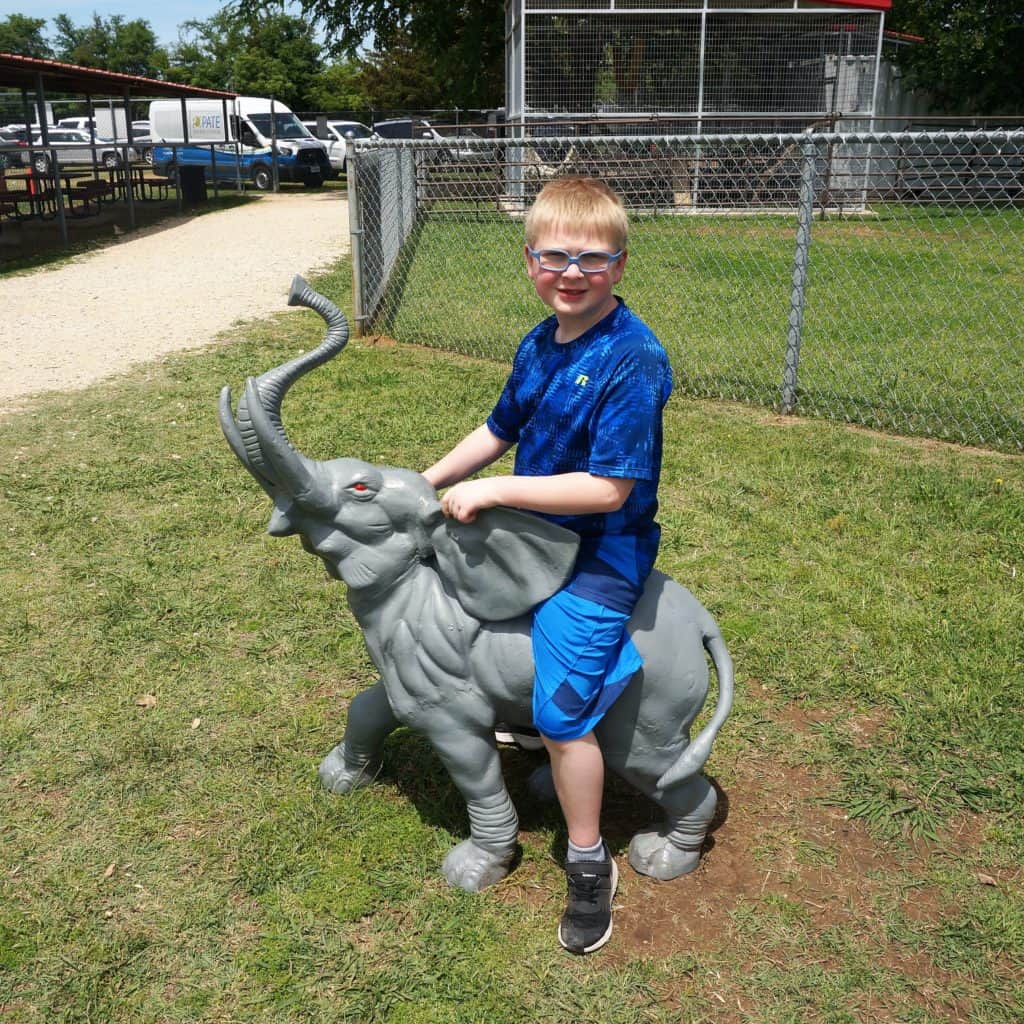 We wandered around checking out the other animals for a while. They had some sloths that were pretty funny. They are so slow! One of them was climbing on a ladder and it was like watching him in slow motion. They had quite a few different animals that we got to check out.

We eventually found our way over to the bear exhibit. Their two bears are rescues. and were nursed back to health at Sharkarosa. There is an on-site restaurant called the Bear’s Den that has certain times where you can eat with the bears. They’ll bring the bears to the edge of their exhibit that is right beside the patio at the restaurant and they feed the bears while you eat your dinner. We didn’t eat there, but we checked it out.

We still had some time to kill before our tram ride so we made a stop by the playground. Noah asked me to push on the merry-go-round right away. He got a few spins then another little girl came up and wanted to ride with him.

After a few minutes, another younger girl came over and wanted to ride so we stopped to let her on. I started spinning them again – slowly, I might add – and the younger girl pretty much immediately fell off – right into a giant mud puddle. OH NO!!!!!

She started crying and the dad rushed over and helped her up. She was covered in mud. I felt so bad! I did not realize that she wasn’t holding on.

We eventually got the heck out of there and got in line to wait for our tram ride. 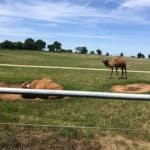 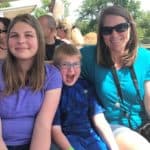 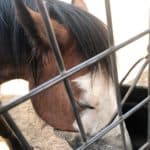 Horse Eating on Our Tram Ride 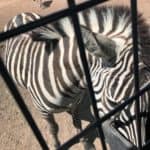 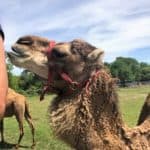 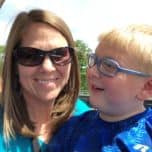 Bought Two Seats But Only Used One

We saved a lot of our animal food so that we could feed the animals on our tram ride. They had buckets attached to the side of the tram so that you could put the animal food in it for the animals.

We saw a lot of different animals on our tram ride – zebras, different types of horses, several camels, a pot-belly pig, and others. It was fun to be able to pet the animals and see them up close.

I’d say we definitely had a lot of fun at Sharkarosa Wildlife Ranch and I hope next time we get to eat with the bears at the Bear’s Den.

More Posts About Our April Adventure