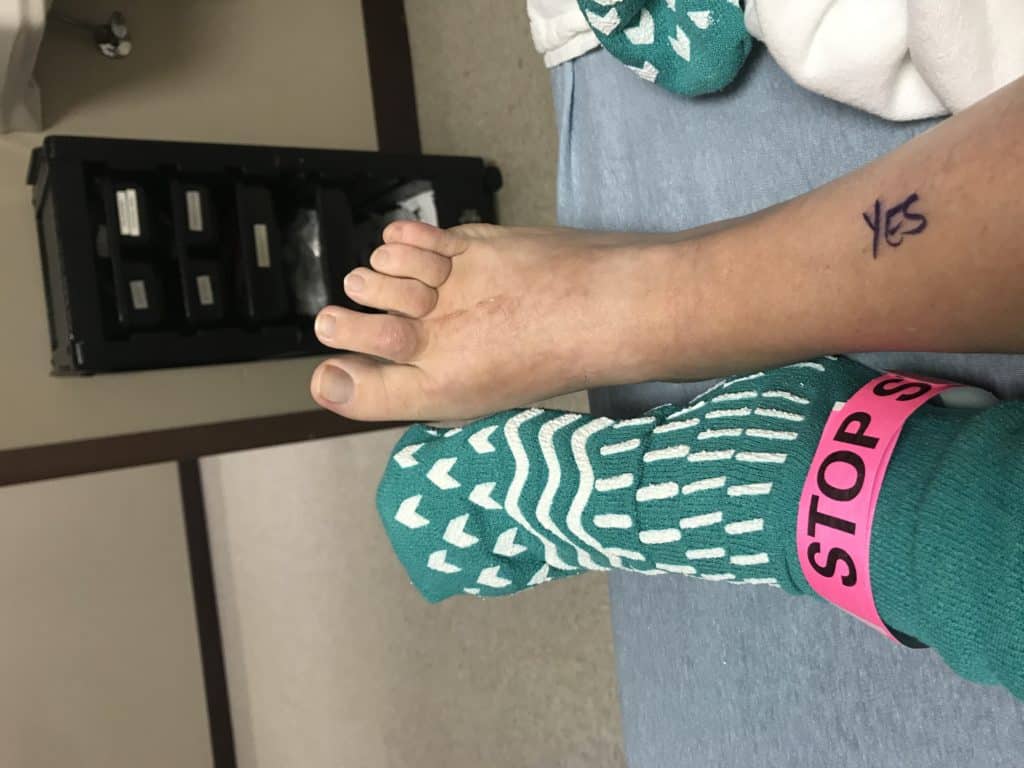 The day of surgery was a lot like the first one. Same grippy socks

. Same STOP band. My surgery was scheduled for early in the morning so I felt like we got in and out a lot quicker the second time around.

Had I only known …

I didn’t get the nausea med or the nerve block that I had with the first surgery and I wish I’d had both of those things. I was hurting and sick on my way home. That part was no fun! 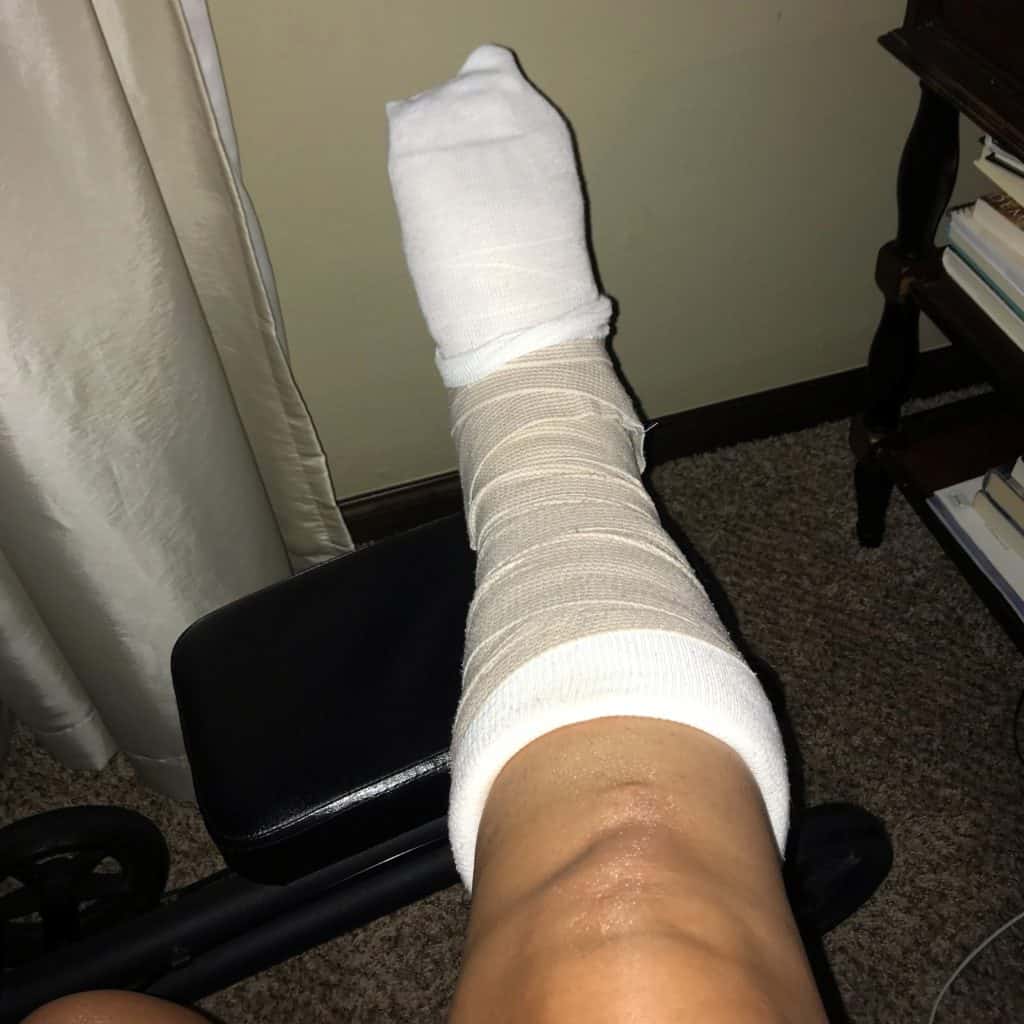 Pathetic but Recovery is Necessary

For the first several days, I didn’t do anything except lay on the couch and feel sick and terrible. By Monday, I had to stop taking the pain medication so that I could go back to work. The narcotic pain medication just doesn’t agree with me because I felt better once I stopped taking it. 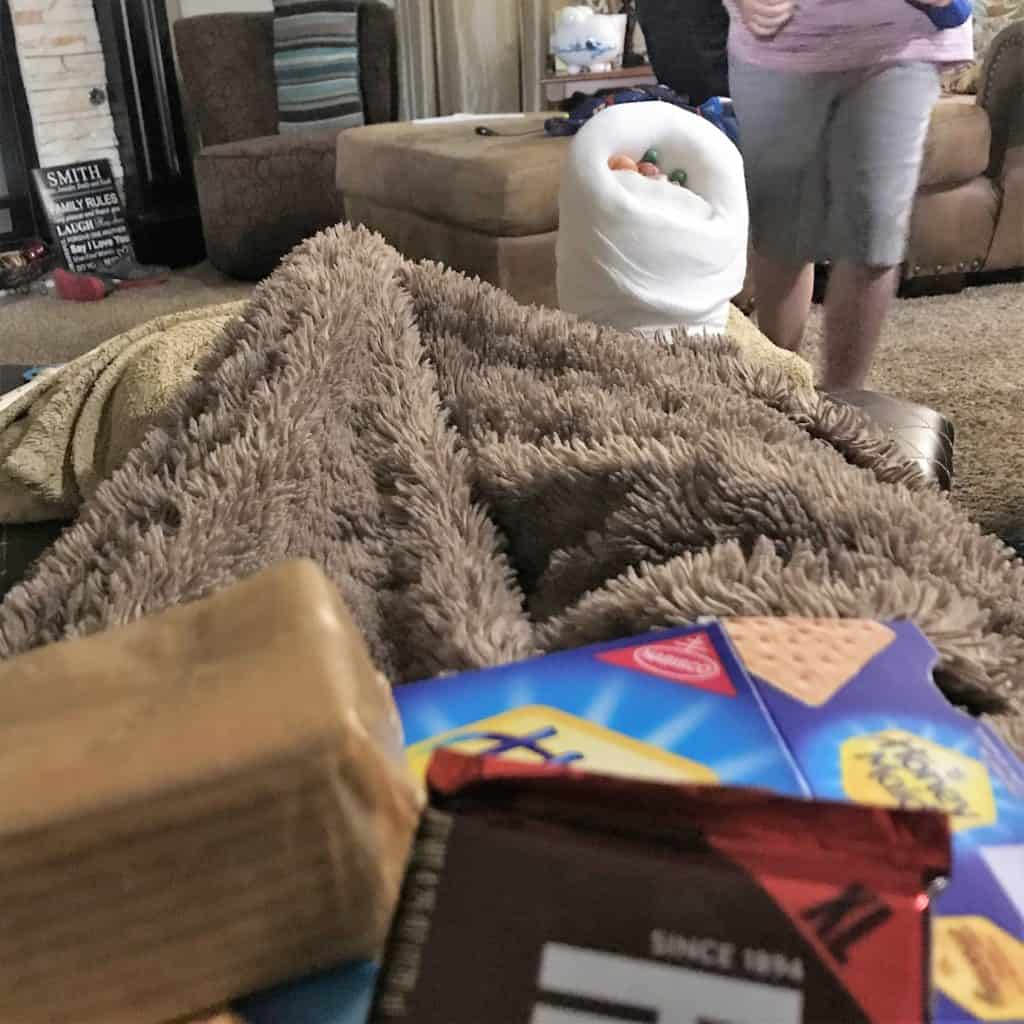 Stop Here if Medical Stuff is Not For You

You might have noticed in the picture above, but the second surgery included getting pins put into my toes. The little green balls are attached to the top of the pins. Sorry for the gross picture. 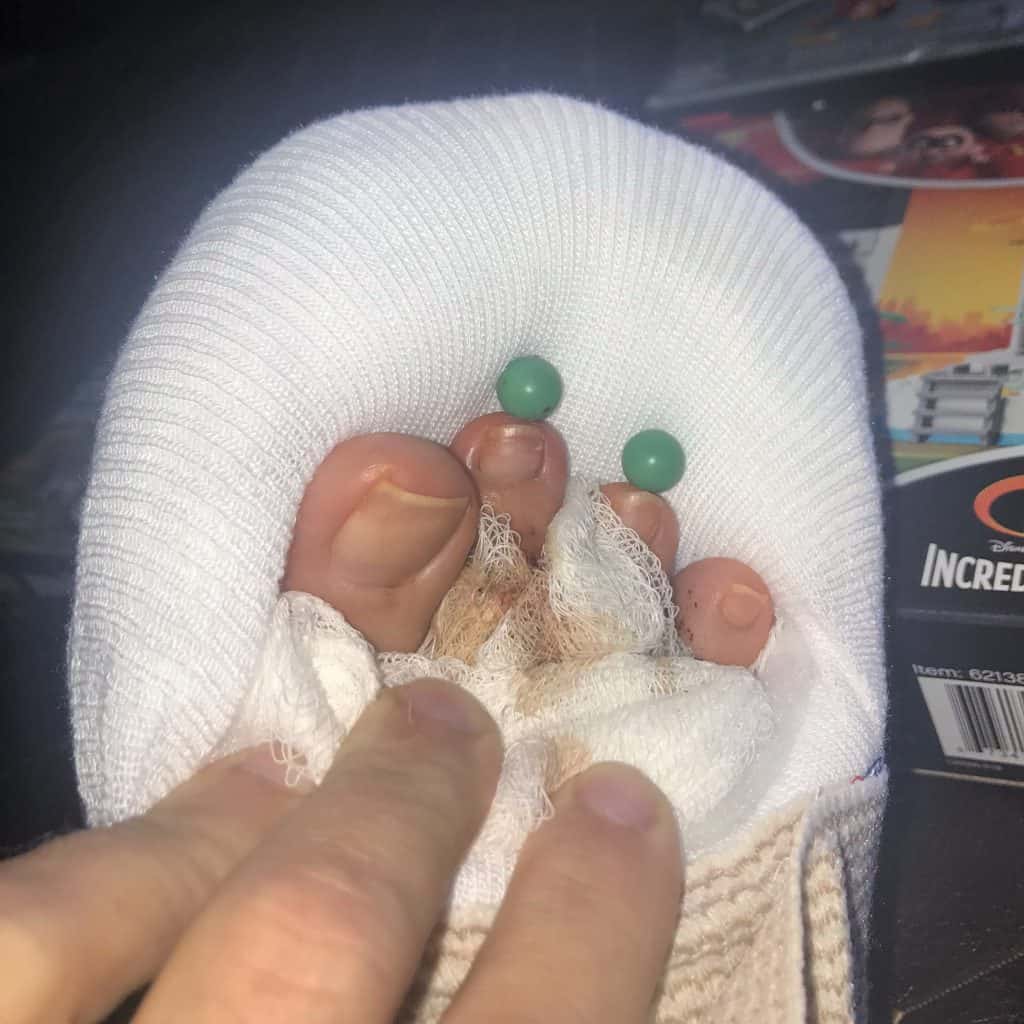 What Goes In Must Come Out

The pins were taken out at the doctor’s office this week. No numbing anything, no special preparation. Just a set of allen wrenches and a pair of gold scissors. Well, pliers. 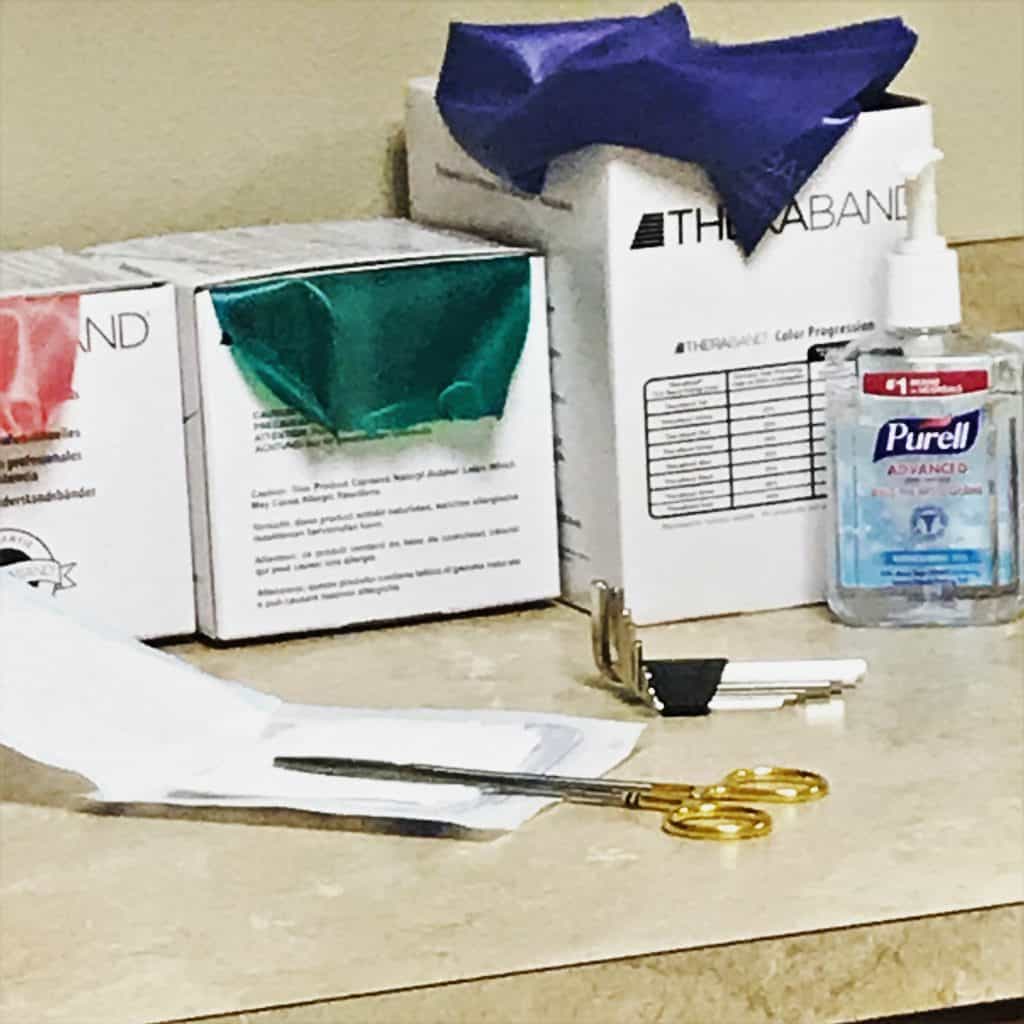 I Could Have Told You …

After the doctor pulled the pins out,  Mike decided that they were actually rods and not just pins. They were at least 4 inches long and impressively thick! I could have told you that they were not small based on how they felt in my foot.

I Aim To Please

The doctor said that I was a good patient because only one of my pins was bent just a tiny bit. Well, he’d already told me that getting the pins out is easy “as long as the pins are not bent” so I made darn sure my pins were not bent. I’ve been sitting on the couch and doing less around the house than I ever have before but it’s okay because my pins were not bent.

Nerve Pain Is Not Fun

Now that the pins are out, I’m cleared to walk in my orthopedic walking boot

. I’ve taken only a few steps so far. I still have a lot of nerve pain in my toes since the surgery. The doctor gave me a prescription to try but the medication was out of stock at the pharmacy. I’m hoping it’ll be available in the next day or two so that I can get some relief. 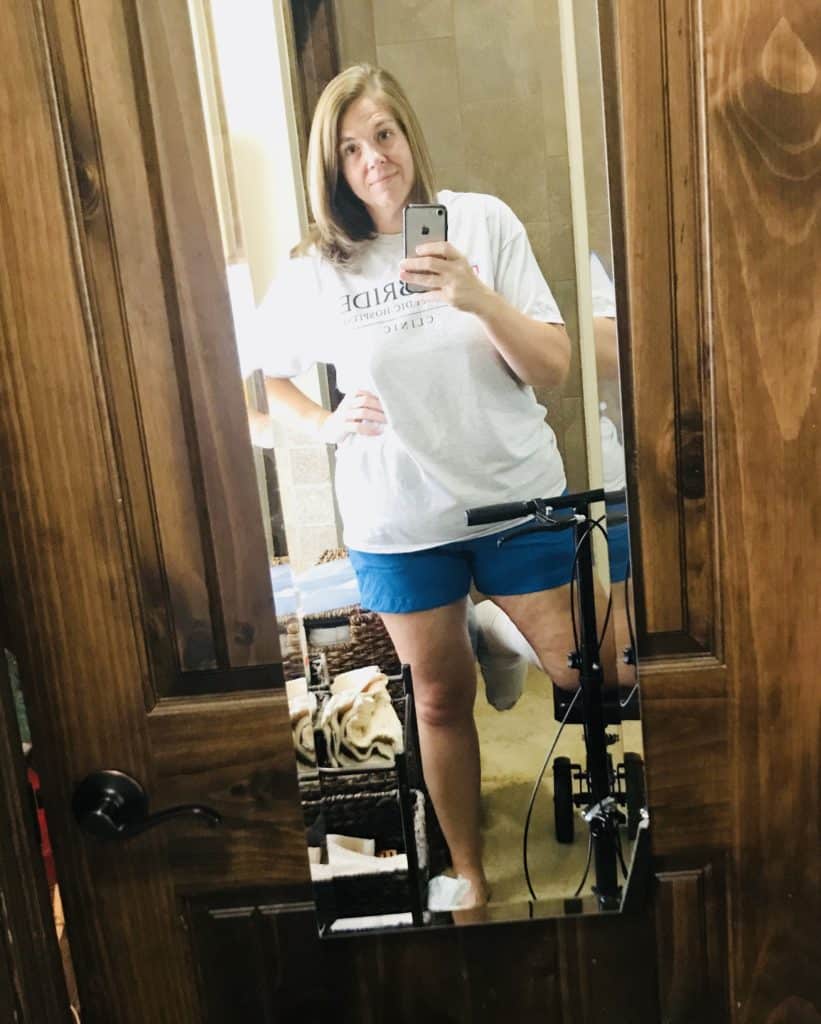 Until then, I’ll keep using the knee scooter

as needed so that I can get around.

Now if the pain will just ease up …