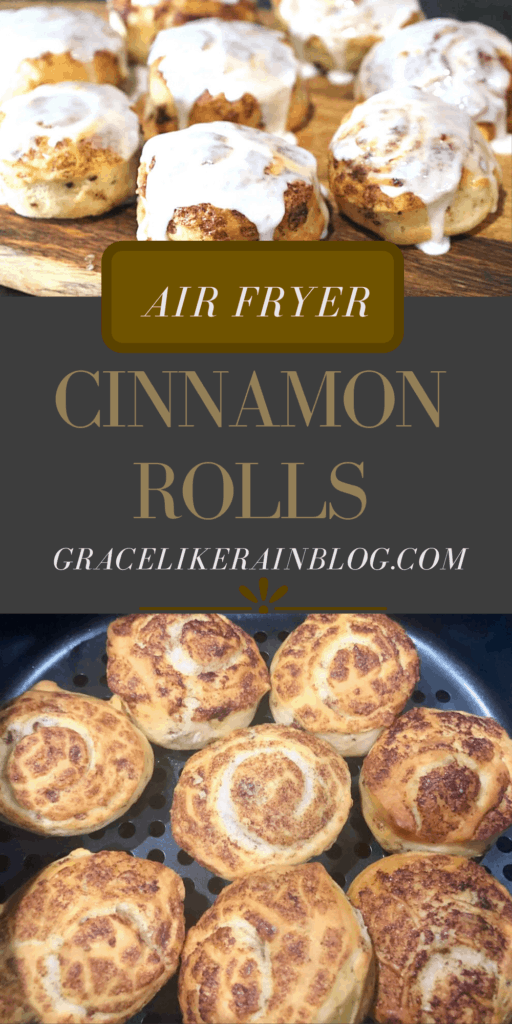 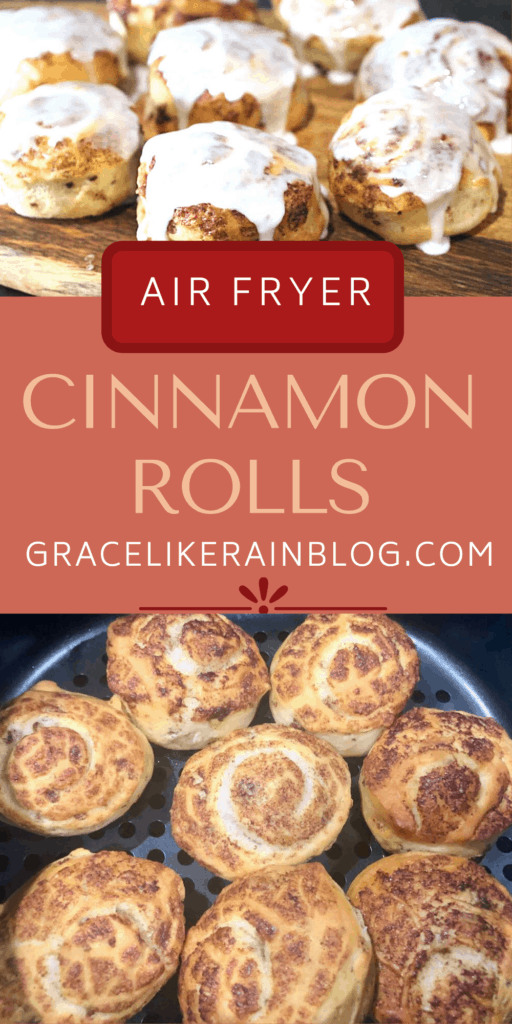 Air Fryer Cinnamon Rolls are a great quick and easy breakfast idea. The Air Fryer cooks them faster than a traditional oven and they are perfectly soft and tender with a thick layer of icing.

My son, Noah, loves these cinnamon rolls for breakfast.

He’s getting to the age where he can almost make them on his own without burning himself.

I love how the air fryer makes cooking easier for kids.

This is a perfect beginner air fryer recipe.

I know that preheating the air fryer seems like a step that could easily be skipped, but don’t do that on this recipe.

You only need to preheat the air fryer for 4-5 minutes before adding the refrigerated cinnamon roll dough.

I tested this recipe with a 12-ounce package of Pillsbury Cinnamon Rolls that has 8 rolls in it.

All 8 rolls fit into my air fryer basket at one time with plenty of room around them.

Key to Success #2 – Cook at a Lower Temperature

To keep the cinnamon rolls soft and tender, we’re cooking them at a lower temperature than you would use for traditional cinnamon rolls.

Heat your air fryer to 320 degrees F. This is the secret to soft air fried cinnamon rolls.

If you cook the cinnamon rolls in the air fryer at a higher temperature, you risk the rolls coming out too brown on the top but under-baked inside.

The cook time is only 7-8 minutes for the Pillsbury refrigerated cinnamon rolls.

All air fryers are different though so you will need to watch your cinnamon rolls closely.

In my air fryer, I cook them 8 minutes max and I do not flip them.

Check them after 7 or 8 minutes then flip them over and cook another 1 or 2 minutes if they need it.

Key to Success #3 – Wait A Few Minutes Before Icing

The trick to a thick coating of icing is to wait a few minutes before spreading the icing over the top of the cinnamon rolls.

If you spread the icing on the cinnamon rolls as soon as they come out of the air fryer, the icing will melt and slide right off onto the plate.

It’s so hard to wait! But I like to allow the cinnamon rolls to cool for about 5 minutes before I add the icing on top.

The icing will still melt a bit, but it will still be thick and glorious.

Save this Air Fryer Cinnamon Rolls recipe to your favorite Air Fryer board or your Air Fryer Breakfast board.