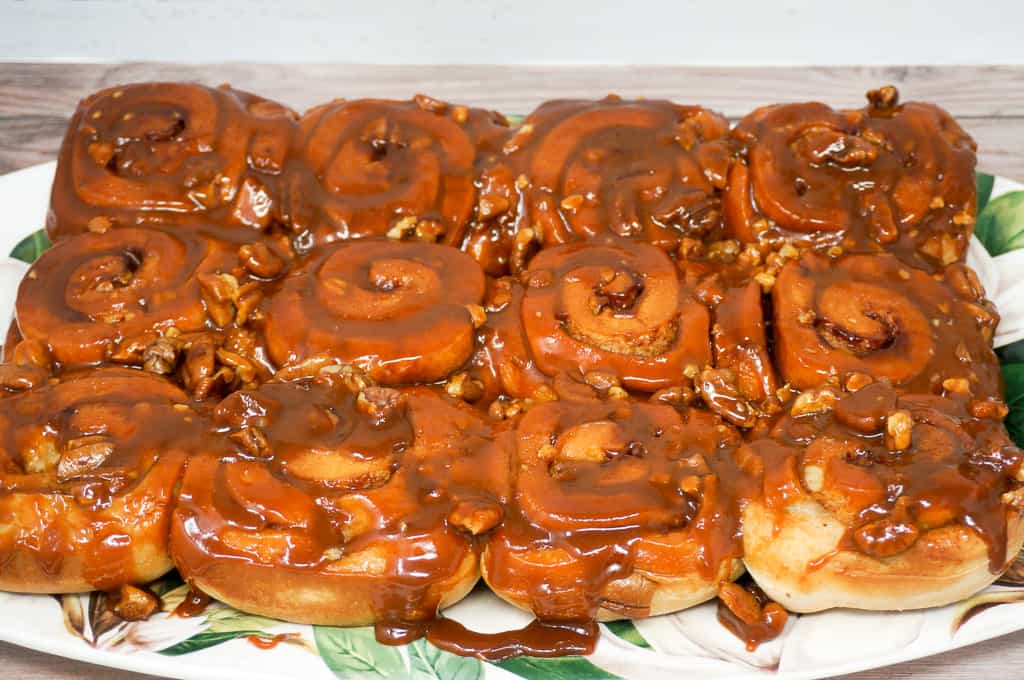 Sticky Puppies are caramel pecan sticky buns that are made with frozen cinnamon rolls and homemade buttery caramel sauce. By using quick-rise rolls, you can make these delicious Caramel Cinnamon Rolls in about 30 minutes. Time to eat!

Sticky Puppies are a cute name for a seriously delicious breakfast treat.

When we were first married, we would sometimes make those Pillsbury refrigerated Caramel Rolls for breakfast on the weekends.

I don’t really know why I started calling them Sticky Puppies – I’m sure I was trying to be cute.

And now the name has stuck all these years later.

The recipe has grown up and so have we!

Key to Success #1 – The Caramel Sauce

Is it caramel sauce or butterscotch sauce? Let’s go with a little bit of both.

The thick and buttery butterscotch caramel sauce practically makes itself!

The key to the sauce is using Cook-and-Serve Butterscotch Pudding mix.

First, melt the butter in a small microwave-safe bowl.

Then stir in the pudding mix and the brown sugar. You can just stir it together with a spoon.

I used a USA Pan metal baking pan for this recipe mainly because the caramel and pecan sticky buns are not served in the baking pan.

These USA pans are great for baking and have a non-stick quick-release coating that makes them perfect for sticky sauces – and sticky buns.

After the caramel sauce is in the pan, sprinkle the chopped pecans over the top.

You can use more pecans or no pecans in these caramel and pecan sticky buns if you’d like.

Chop them big or chop them small.

Key to Success #2 – Use the Right Cinnamon Rolls

As it is written, this recipe calls for the Rhodes AnyTime! Cinnamon Rolls.

These are the Cinnamon Rolls that are found in the frozen foods section of your local supermarket and they do not need to rise prior to baking.

They either come in a 6-count box that bakes in a prepackaged cardboard or metal baking pan that is included in the box. Or they come in a plastic bag of 9 cinnamon rolls.

Read on the package and see if it says that you should put the cinnamon rolls into a COLD oven that has not been preheated.

If so, you’ve got the right one.

In either case, you’ll need 12 cinnamon rolls for this recipe.

I’m not going to be mad if you only use the package of 9 cinnamon rolls and just make them extra gooey.

You can also use the Rhodes Thaw, Rise and Bake Cinnamon Rolls.

They are also frozen rolls, but they need to thaw and rise for 3-5 hours before being baked.

For the Thaw, Rise, and Bake Cinnamon Rolls, you will need to make the following modifications:

You can use homemade cinnamon rolls in this recipe.

We have a great recipe for traditional cinnamon rolls that you could use.

These modifications need to be followed for homemade cinnamon rolls:

Keep these in the freezer and use them to double the frosting next time you make traditional cinnamon rolls. Yum!

Key to Success #3 – Serve Them Upside Down

When these Sticky Puppies come out of the oven, that ooey gooey caramel sauce is molten liquid and seeping right into your cinnamon rolls.

Let the pan of rolls hang out on the countertop for just a few minutes to let them cool down a tiny bit.

Then turn your baking pan over onto a serving platter so that your cinnamon rolls come out caramel sauce side up!

I literally put my serving tray on top of my baking pan then turn the whole handful over. Just flip it, flip it quick!

I love, love, love this beautiful scalloped white serving platter, but it does not have to be anything fancy.

In a pinch, you could use a large rimmed baking sheet as a serving tray.

The caramel sauce will spread a bit, but it will not run all over your platter. It is pretty thick.

And it’s delicious. So buttery and rich.

Sticky Puppies are my favorite it.

The are best served warm. And they are great reheated in the microwave for 15-20 seconds.

Save this Sticky Puppies Caramel Cinnamon Rolls recipe to your favorite Breakfast Treats board or your Caramel Delights board.

Rhodes AnyTime! Cinnamon Rolls are found in the frozen section of the grocery store and they do not need to rise before baking. You put them into a COLD oven and they rise as the oven heats.

Rhodes Thaw, Rise and Bake Cinnamon Rolls are also frozen rolls, but they need to thaw and rise for 3-5 hours before being baked. You CAN use this type of cinnamon rolls with this recipe. Allow rolls to thaw and rise on top of the caramel mixture and pecans in your 9x13-inch pan until doubled in size. Preheat oven to 350 degrees F then bake the rolls for 15-20 minutes until light brown.

You can use homemade cinnamon rolls in this recipe. Allow your cinnamon rolls to rise on top of the caramel mixture and pecans in your 9x13-inch pan until doubled in size. Preheat oven to 350 degrees F then bake the rolls for 15-30 minutes until rolls are light brown.

Cinnamon Roll Icing Packets are not used in this recipe. Keep these in the freezer and use them to double the frosting next time you make cinnamon rolls.

Did you make this recipe?

If you’re looking for more fun recipes, check out the Tik Tok Viral Donut Dump Cake recipe and how it went when we made it at home. 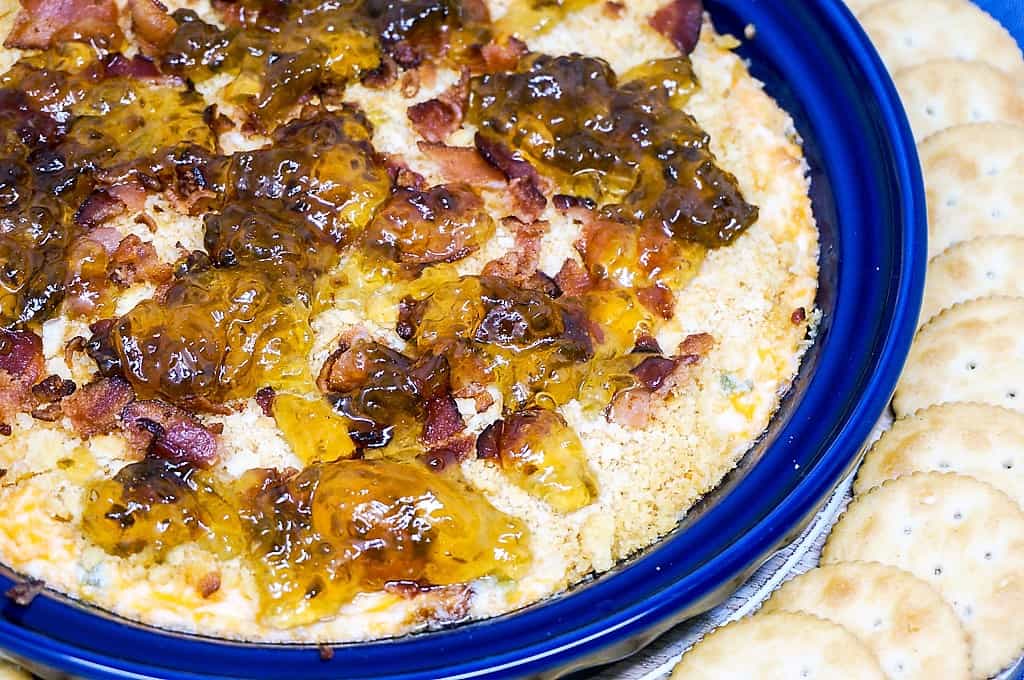 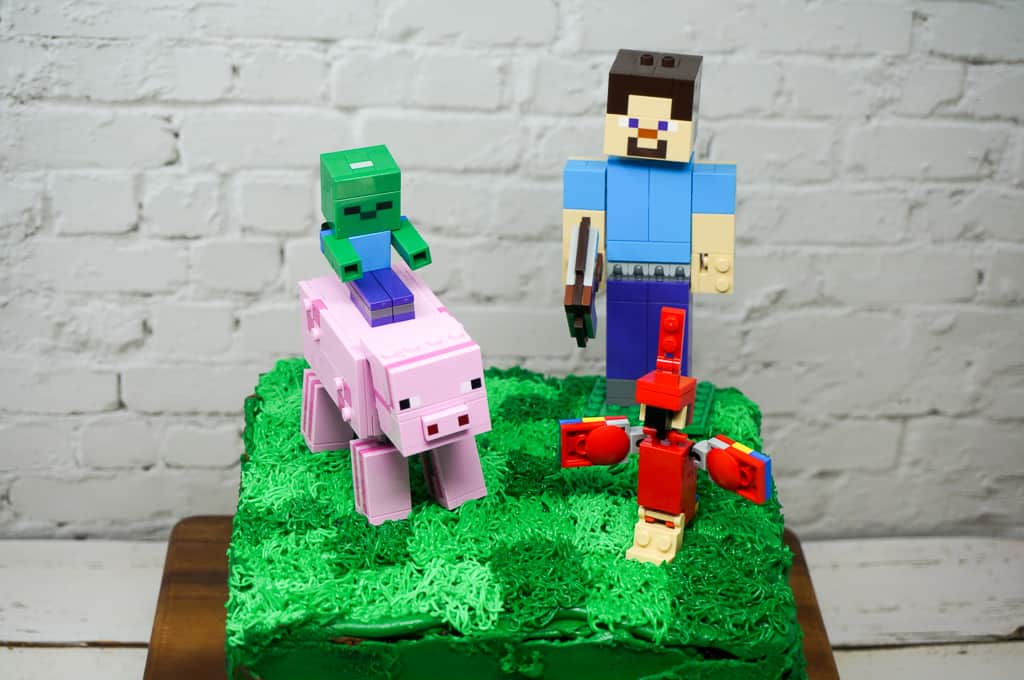