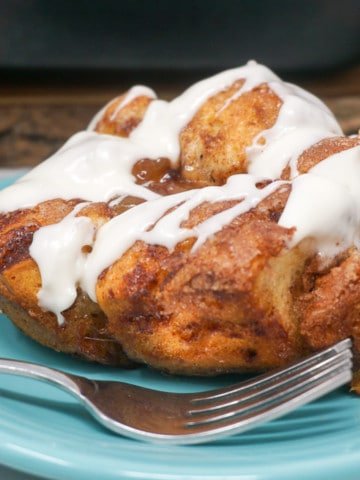 Apple Cinnamon Bake doesn’t have to be just for breakfast!

It would be delicious as a “cake” for dessert or simply as a snack.

You don’t have to wait for a special occasion to enjoy this delicious treat.

This Apple Cinnamon Bake recipe is so easy because it uses ready-made cinnamon roll dough and canned pie filling.

We’re combining these two quick ingredients with a few kitchen staples to make a fabulous breakfast or dessert.

First, open both packages of cinnamon rolls and cut each roll into quarters.

If you are using the larger Grands cinnamon rolls, cut each roll into 6 pieces or so.

You want them to be bite-sized after they are baked.

Next, put the cinnamon roll pieces into a large bowl and pour the entire can of apple pie filling over it.

Use a spatula to stir the mixture together, making sure to coat all the pieces of cinnamon roll in the apple pie filling.

Pour the apple cinnamon roll mixture out into your baking dish (I love these pretty Fiesta baking dishes!)

Spread the mixture to the edges of the dish.

Key to Success #2 – Cinnamon Sugar to Form a Crust

Next, we’re going to add a nice sugary crust on top of our apple pie cinnamon rolls.

In a small plastic zip-top baggie, mix together 1/2 cup sugar and 1 teaspoon of cinnamon.

This cinnamon and sugar layer really adds something special because you get little caramelized bits in every bite.

It adds a nice texture to an otherwise soft dish.

Key to Success #3 – Add Tangy Cream Cheese to the Icing

The cream cheese icing is perhaps my favorite part of this dish – right along with the sweet cinnamon rolls and the warm, yummy apples.

We’re using the packets of icing from the cinnamon rolls then adding some tangy cream cheese to really take it to the next level.

Yesssssss! You can totally do that.

We’re adding 4 ounces of cream cheese. That’s half of a standard-sized package.

(Need a recipe that’ll use up the other half of your cream cheese? Try this Fettuccine Alfredo!)

Use your electric mixer to whip up the cream cheese until it is soft and smooth.

Next, add in both packets of icing from the cinnamon rolls.

Cream the icing until it is smooth.

Finally, add one or two tablespoons of milk to thin out the icing a bit.

You want the icing to be thick but pourable.

We’ll be putting the icing on warm bread so it can be a bit thick since it will soften.

But you want to be able to drizzle the icing on the cinnamon rolls.

You, too, can have this at home. Make this!

Save this Apple Cinnamon Bake Recipe to your favorite Breakfast board or your Apple Recipes board.

In a large bowl, stir together cinnamon roll pieces and apple pie filling, coating each piece well. Pour into the prepared baking dish.

In a small zip-top baggie or small bowl, mix together the sugar and cinnamon. Sprinkle over the cinnamon roll and apple pie mixture in the pan.

Bake uncovered for 40-45 minutes, until light brown and bubbly.

In a small mixing bowl using an electric mixer, blend the cream cheese until smooth. Add in both packets of cinnamon roll icing and 1-2 Tablespoons of milk. Mix until icing is smooth and pourable.

Did you make this recipe?

Check out these other great recipes at GraceLikeRainBlog.com. 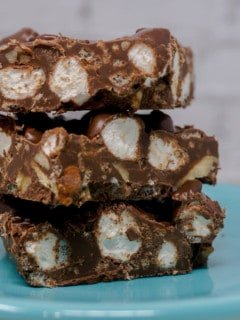 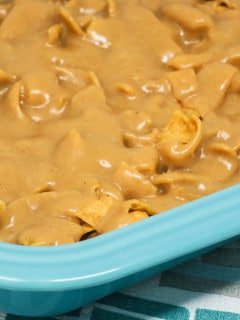