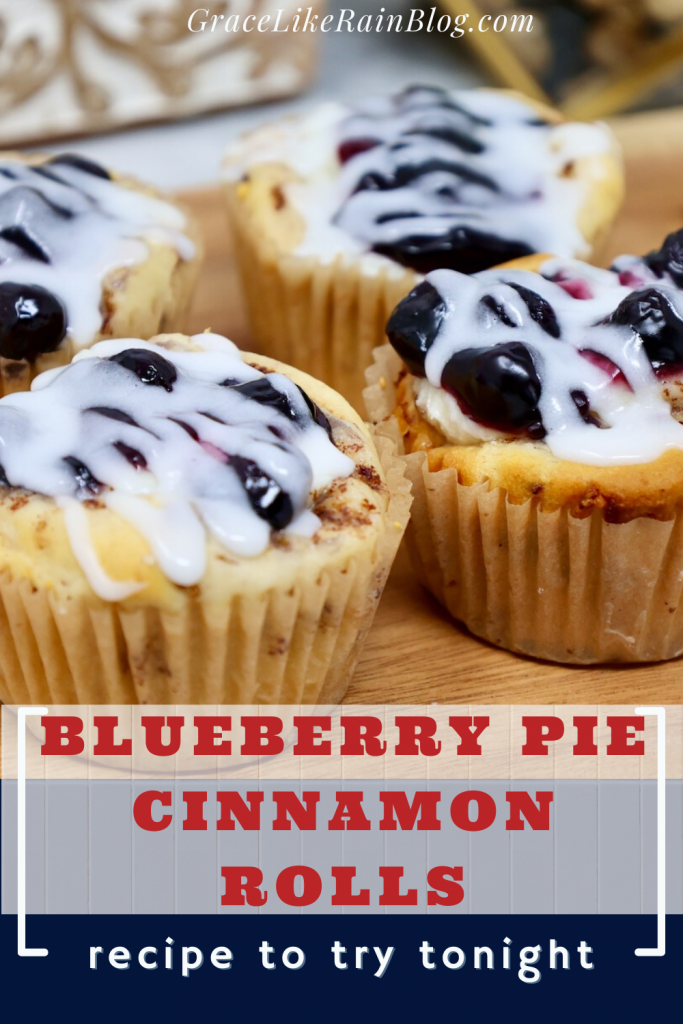 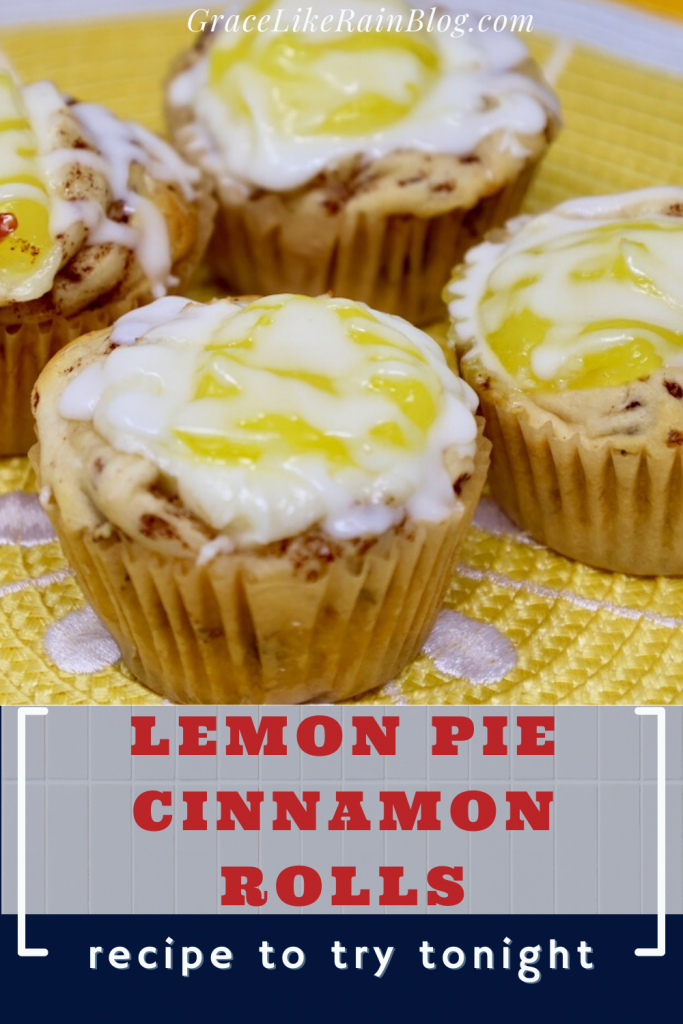 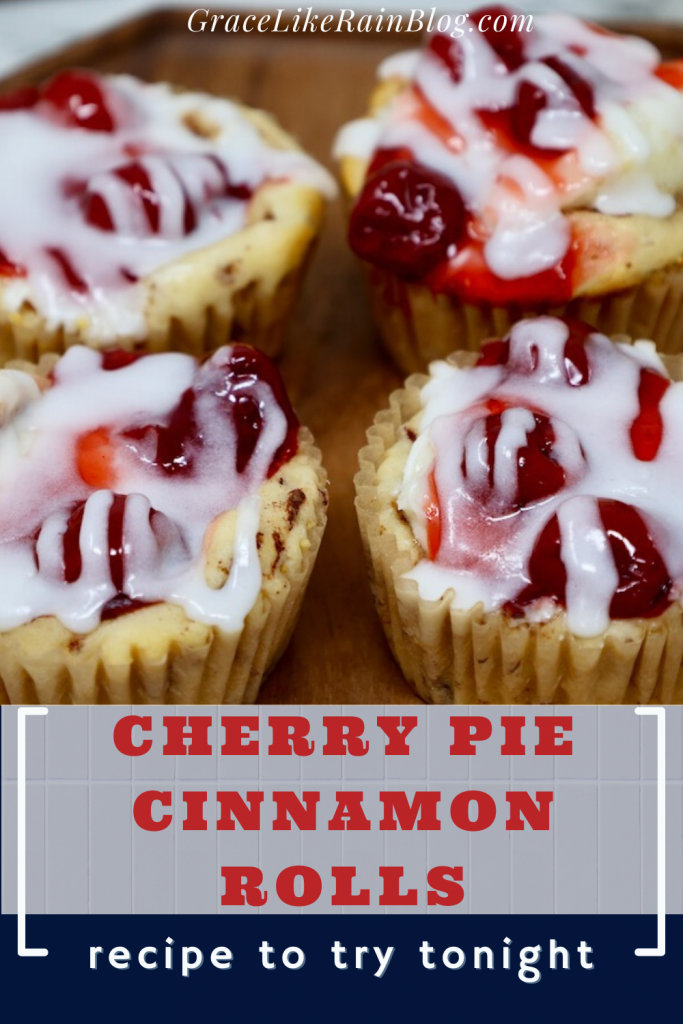 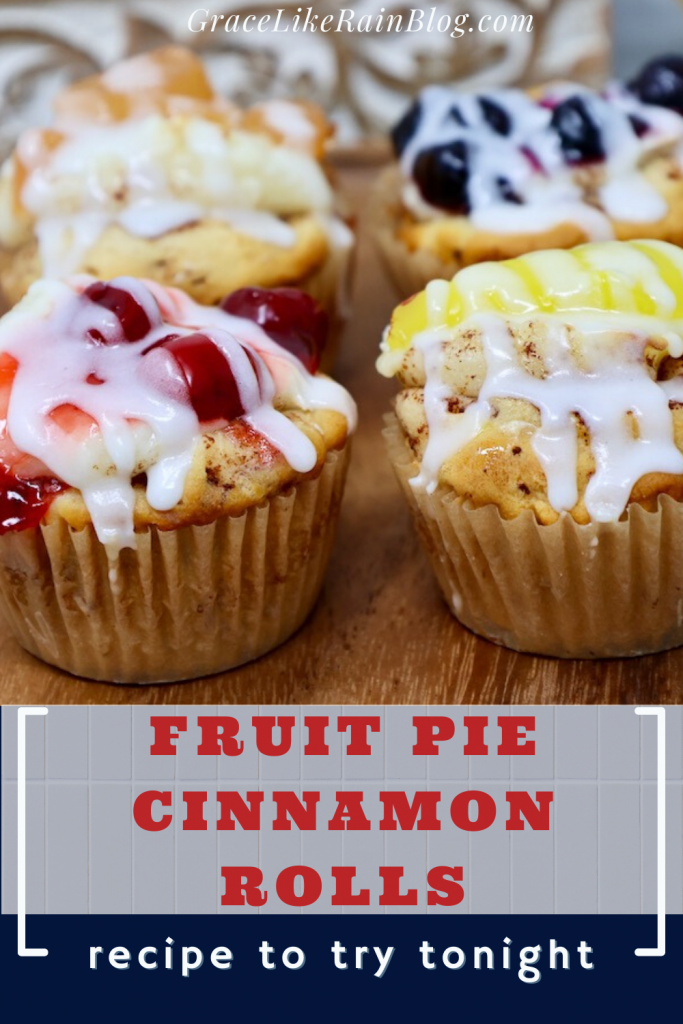 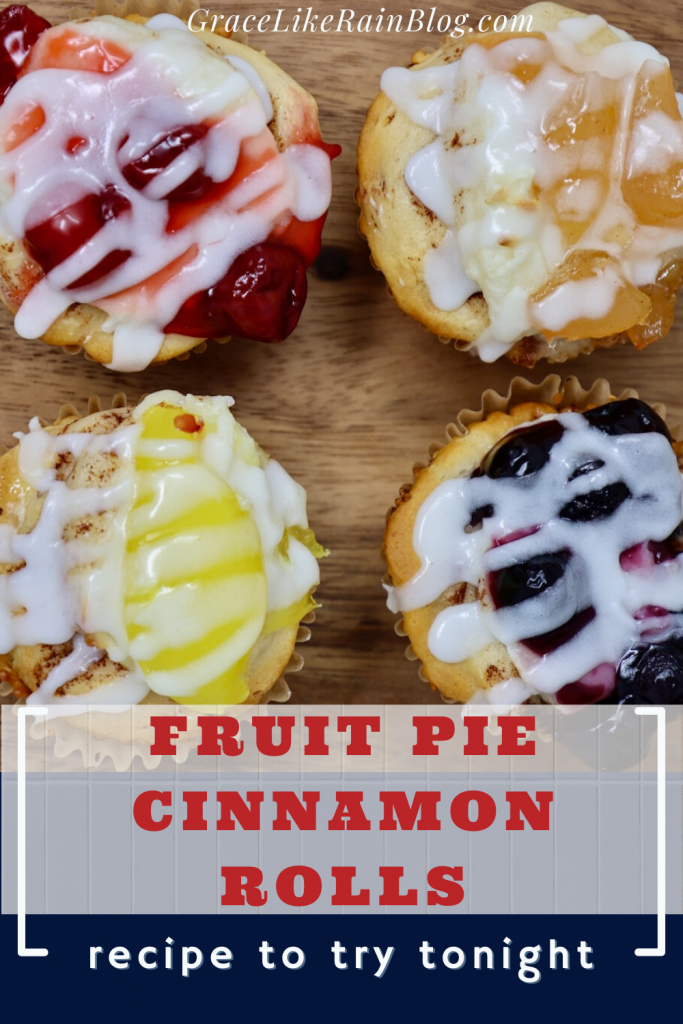 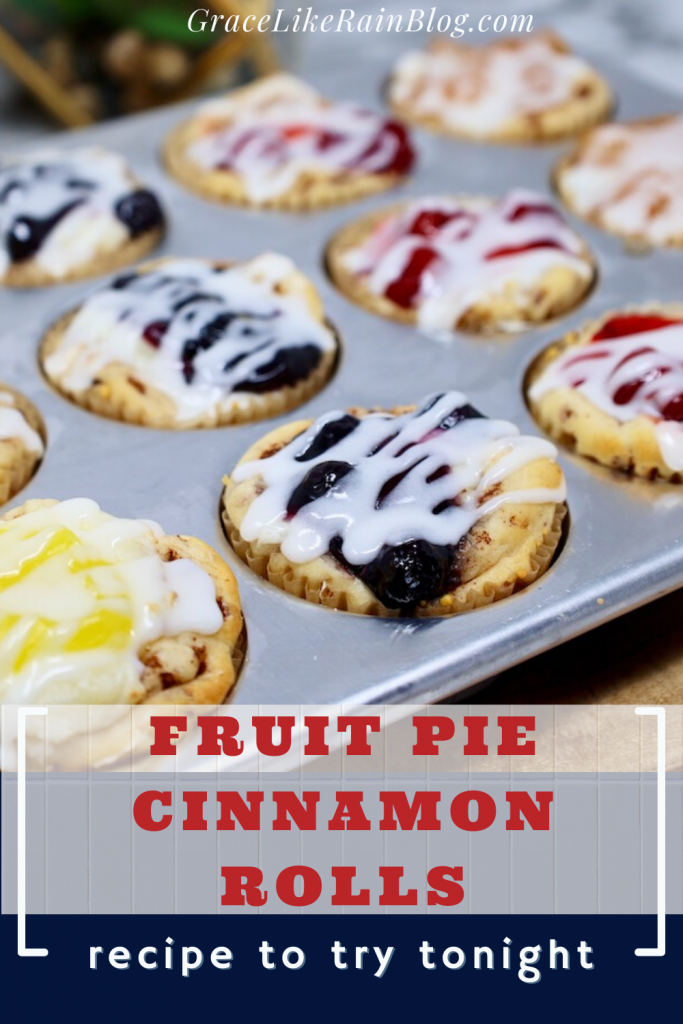 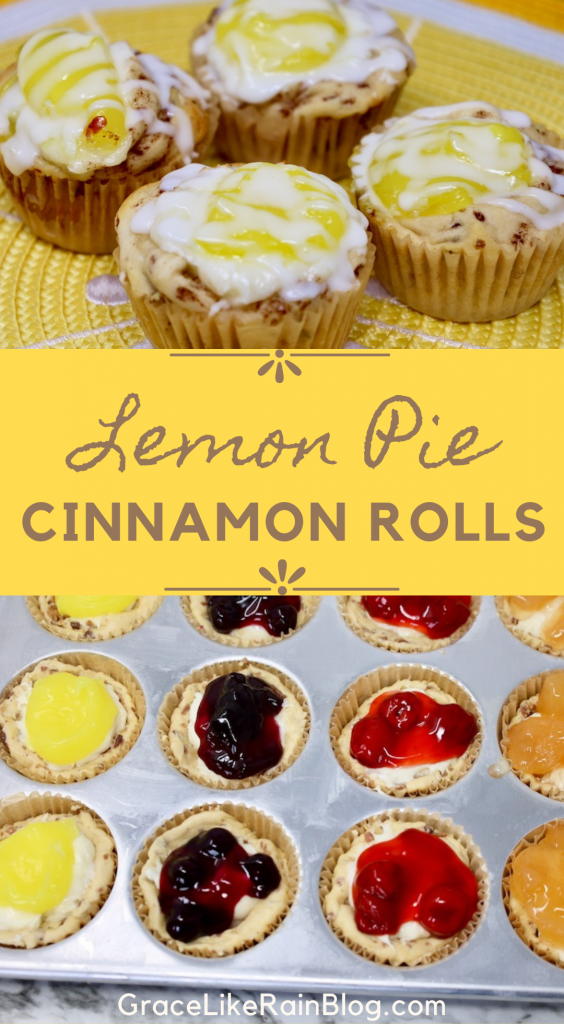 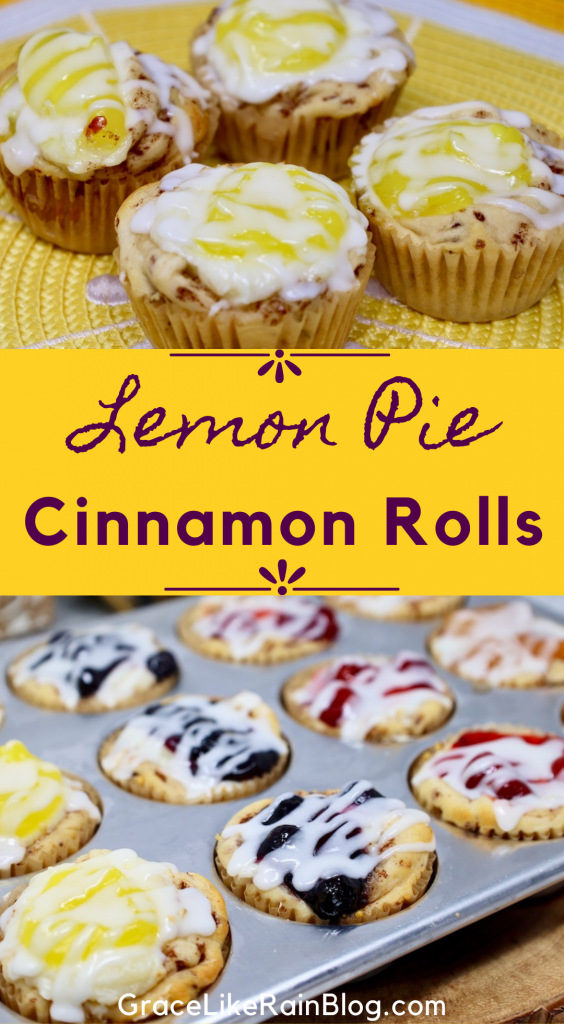 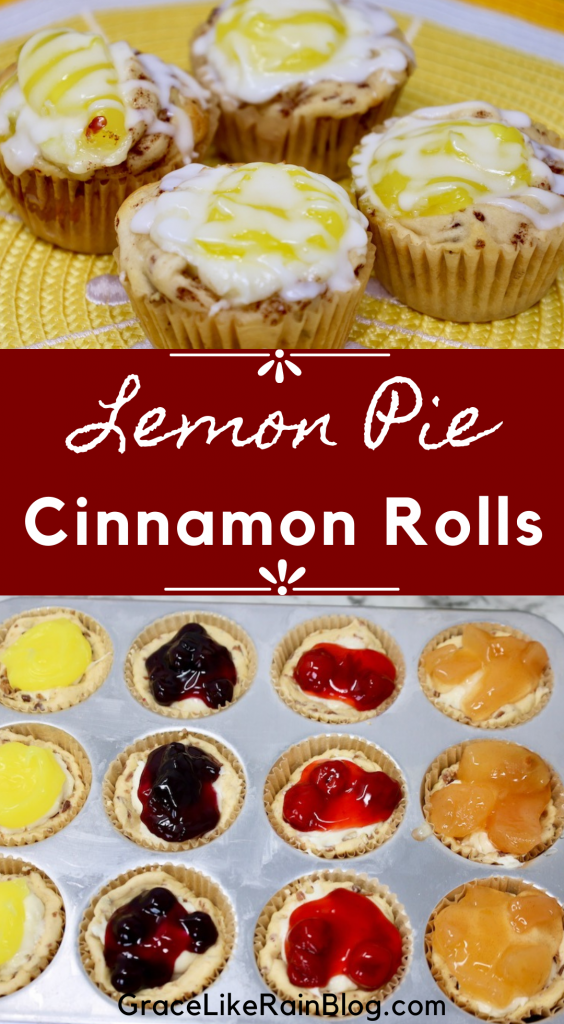 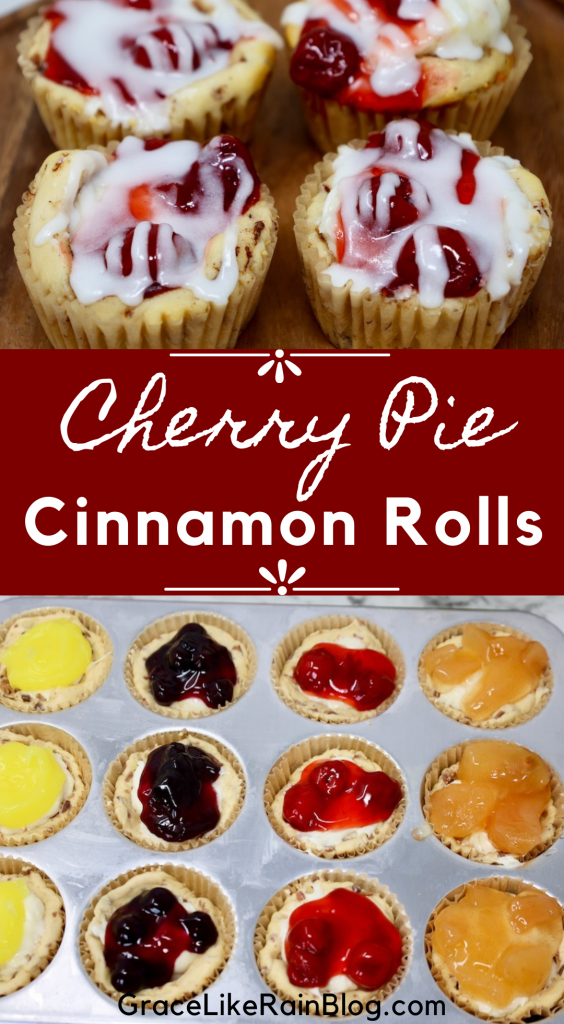 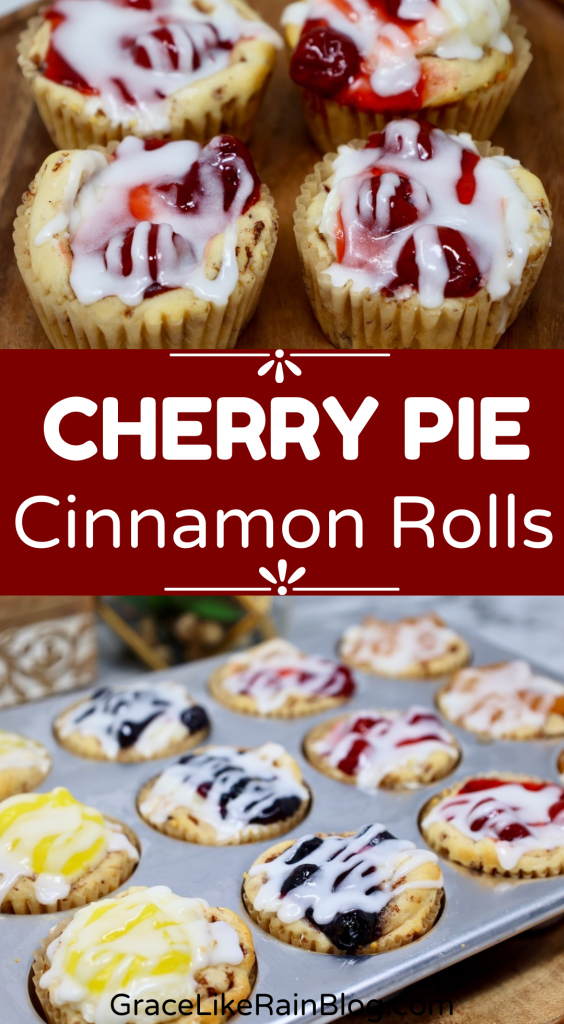 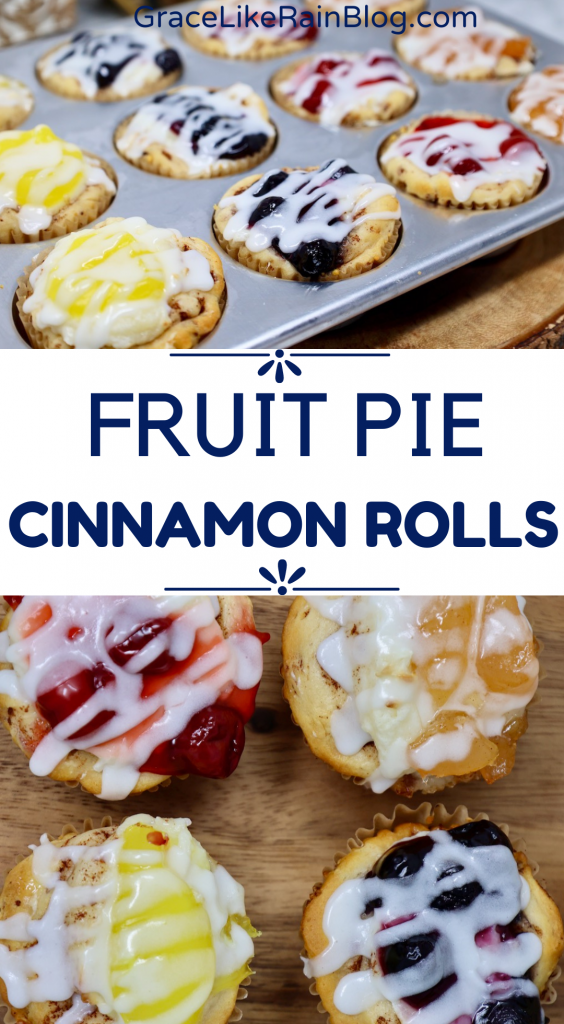 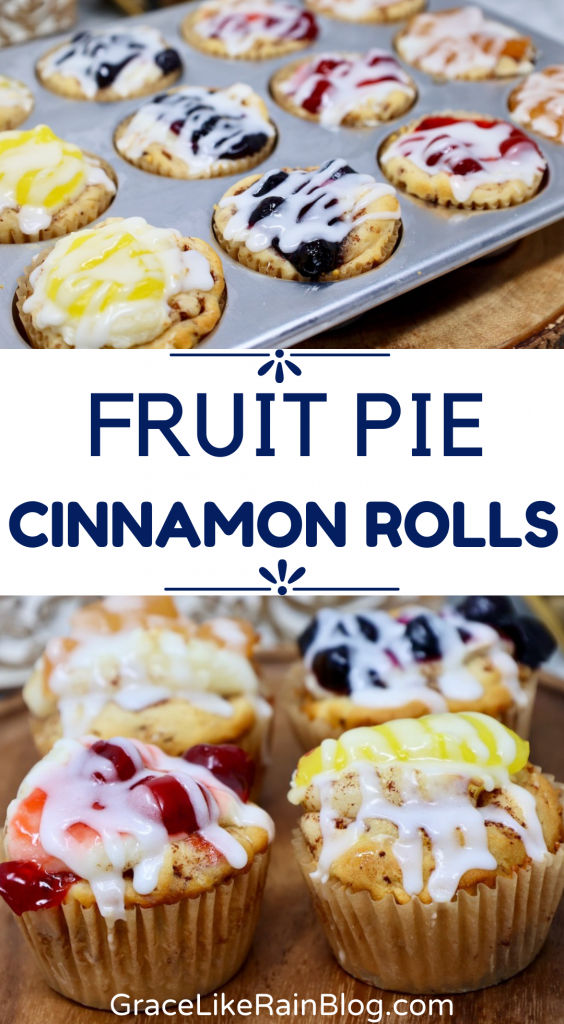 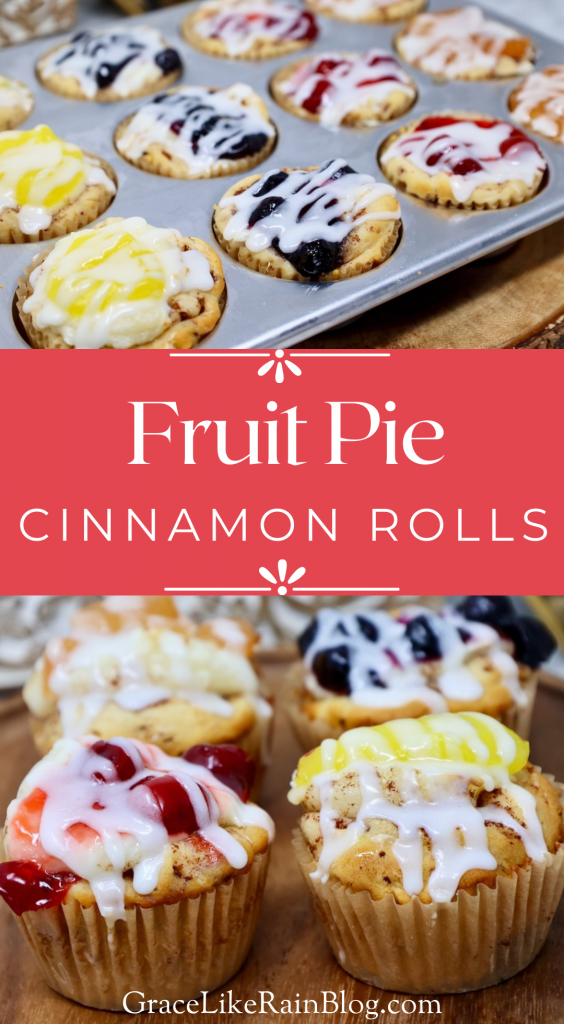 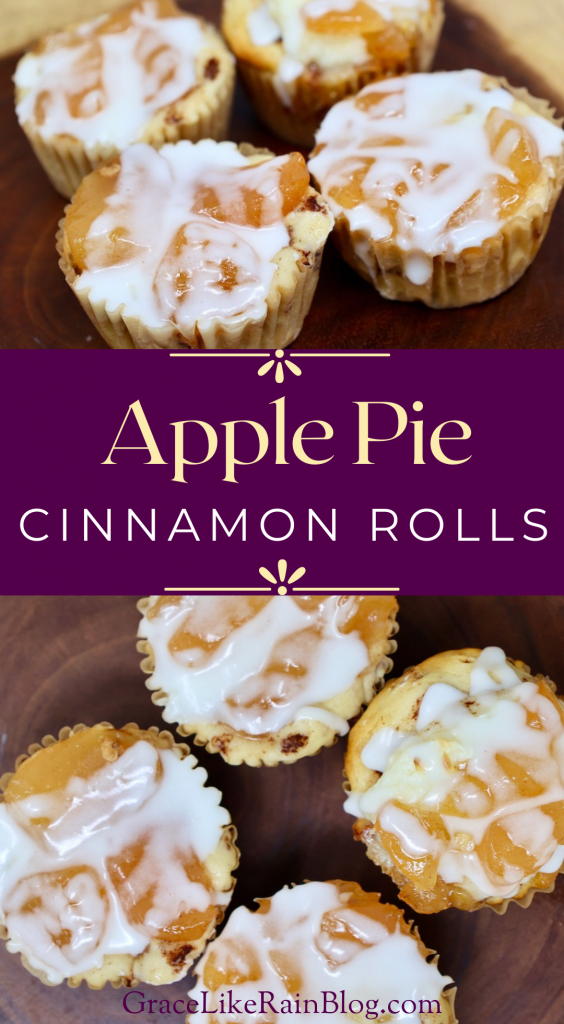 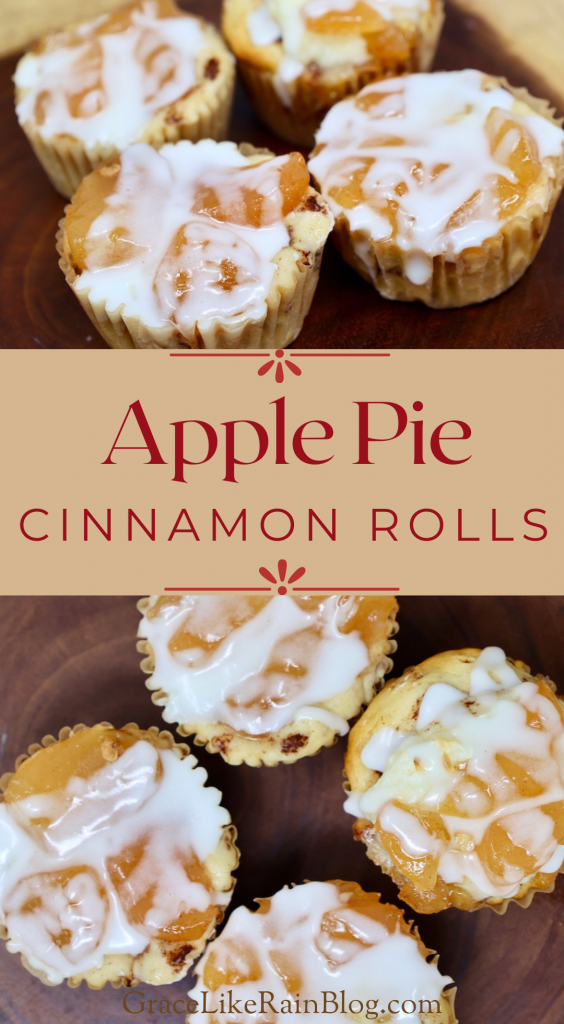 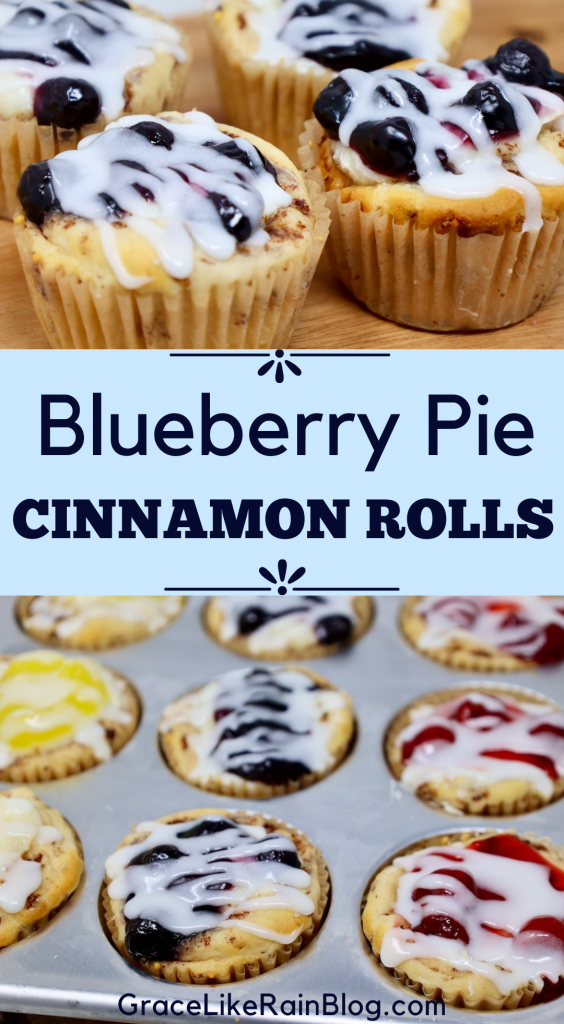 Fruit Pie Cinnamon Roll Cups are a delicious breakfast idea that you make with canned cinnamon rolls and pie filling in your favorite flavor. We’re adding sweetened cream cheese in the middle for depth of flavor. It’s almost like cheesecake topped with your favorite fruit filling on a fluffy cinnamon roll. This is a family favorite! OMG So good!

I adore these cinnamon roll cups!

The sweetened cream cheese adds so much to this recipe and really balances out the cinnamon and the fruit pie flavors.

You would never think a cinnamon roll would go with lemon flavors, but it is really fantastic.

Trust me – you will love this flavor combo in this easy breakfast recipe.

Key to Success #1 – Use the Regular Sized Cinnamon Rolls

It’s like a cinnamon roll, but also a hand pie.

But it has cream cheese and it’s in a muffin cup.

But whatever you want to label it, it starts with a regular-sized Pillsbury cinnamon roll that you get in the refrigerated section of your grocery store.

The Grands are too large to fit in the muffin cups easily.

The regular Pillsbury Cinnamon rolls come in an 8-count package so you will need two of them.

I like to use parchment paper muffin liners, but these are optional.

If you don’t use the liners, grease the muffin cups very well so that your breakfast cups won’t stick.

If you use regular paper liners, I would highly recommend greasing them.

The parchment paper liners do not need to be greased though since they are naturally non-stick.

Use your hands to stretch each cinnamon roll into a larger disc then press it into the bottom of the muffin liners and up the sides.

They don’t have to be perfect. As they bake, they will rise to fill the muffin cups.

Key to Success #2 – Sweetened Cream Cheese Adds So Much Moisture!

Next, cream together the softened cream cheese, sugar, and vanilla extract.

I use my hand mixer to mix the cream cheese filling together, but it’s not necessary if your cream cheese is soft when you begin.

The recipe uses regular granulated sugar, but you can swap it for powdered sugar if you prefer.

Either option will work perfectly in this recipe.

Once the cream cheese filling is smooth and creamy, spoon it into the center of the cinnamon rolls in the muffin cups.

Use a heaping tablespoon of cream cheese filling in each cinnamon roll.

You should have enough cream cheese to easily fill all 16 muffin cups.

No need to smooth out the filling. As the cinnamon rolls bake, the cream cheese layer will spread itself out.

Key to Success #3 – Mix and Match Your Pie Flavor

You can choose which flavor of pie filling you would like to use with your cinnamon roll cups.

It’s really up to you.

I think our favorites were the apple pie filling and the lemon creme filling.

The lemon filling was so luscious!

If you’re hesitant about that one, go ahead and give it a try. You won’t be disappointed.

Here are the fillings that we used:

Full disclosure – We had a lot of pie filling left since we used four different ones for this recipe, but we used the extra to make Air Fryer Fruit Pies the next day.

To save money, you can choose one flavor of pie filling and just buy one can of fruit.

After you add the fruit filling, it’s time to bake the cups until the cinnamon rolls are puffed and light brown.

Remove them from the oven and allow them to cool for about 10 minutes before drizzling the icing from the cinnamon rolls over the top.

I spooned the icing into a plastic zip-top baggie then snipped off the end and used the bag to drizzle the icing. So easy, no mess!