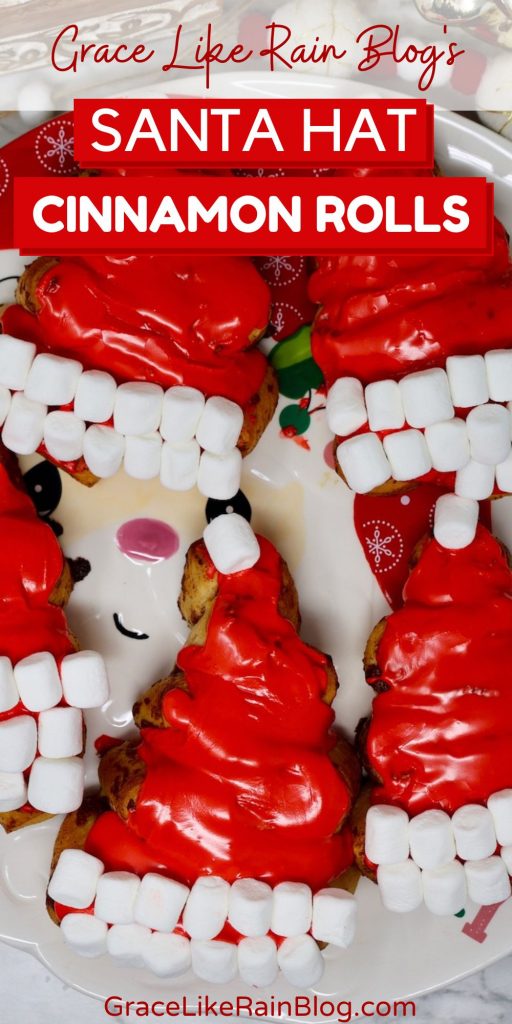 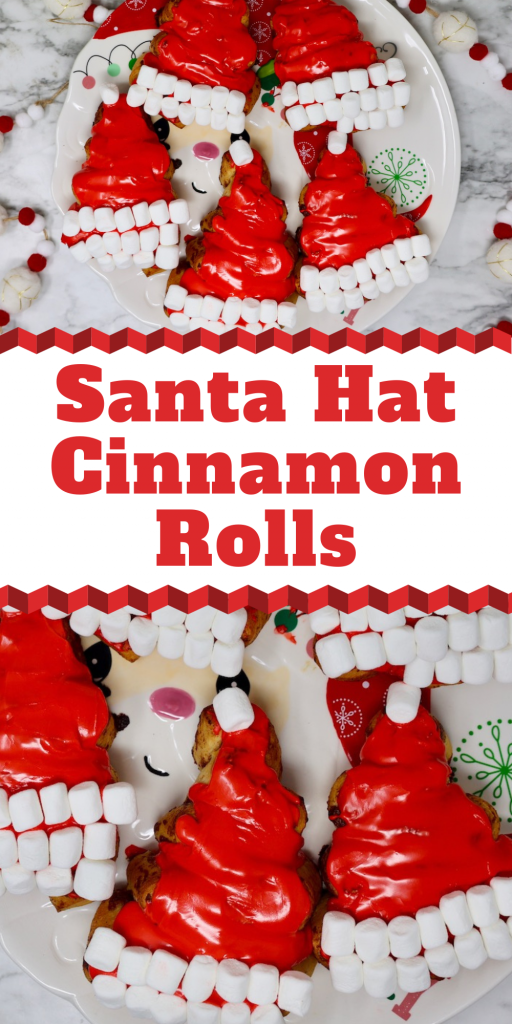 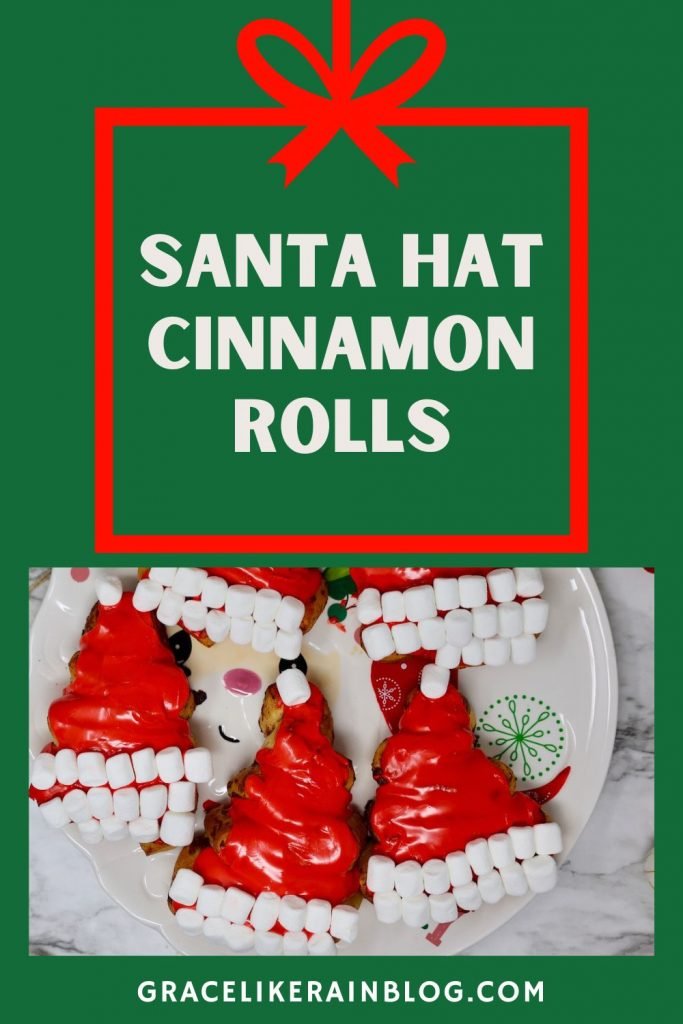 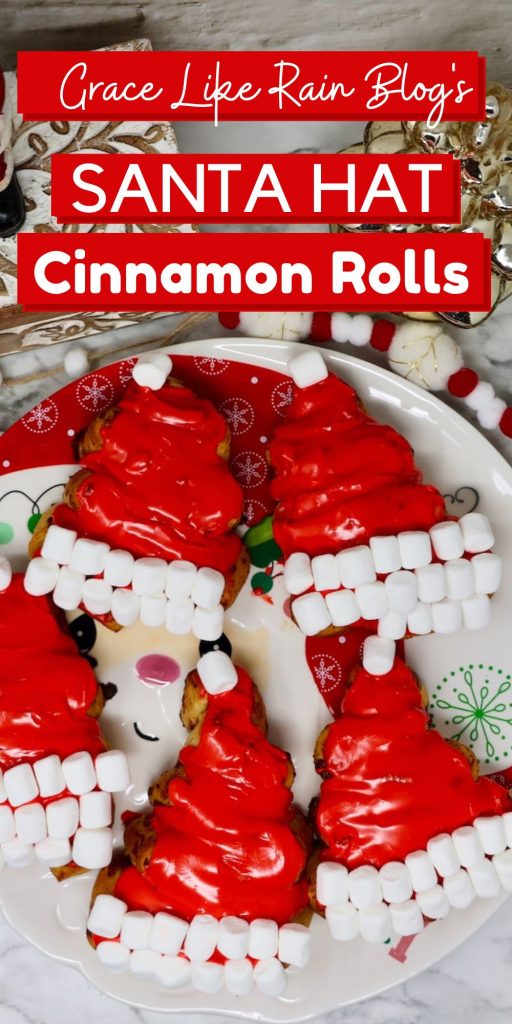 This Christmas, make the holidays extra special with cinnamon rolls that look like Santa Hats. This easy Santa Hat Cinnamon Roll recipe transforms store-bought cinnamon rolls into beautiful, fluffy treats that can be enjoyed as a delicious and festive family breakfast.

Perfect for adding a twist of joy to any morning, these cinnamon roll Santa hats are sure to spread feel-good holiday vibes.

Make your loved ones smile by putting an extra special and fun spin on cinnamon rolls this Christmas.

So start your morning off right on Christmas day with these tasty Santa Hat Cinnamon Rolls – they will make everyone happy!

Who knew Christmas cheer could be found by simply unrolling a can of Pillsbury Grands Cinnamon Rolls?

Believe it or not, these delicious treats are the perfect base material for homemade Santa Hats.

But Pillsbury Grands Cinnamon rolls can be easily unrolled and reshaped into Santa Hats or any other shape you can imagine.

Now it’s time to go bring some holiday spirit into your kitchen with this festive crafty treat!

Key to Success #2 – Cool Those Rolls Before Frosting

For each Santa Hat, unroll one Grands cinnamon roll into a long strip.

Next, fold the dough into a zig-zag pattern to look like a pyramid, smaller at the top and wider at the bottom.

Place the dough on a parchment paper-lined baking sheet and press the dough together tightly so that it doesn’t unravel while baking.

The rolls will be puffy and light brown.

Remove the Santa Hat Cinnamon Rolls from the oven and allow them to cool on the baking sheet for at least 10 minutes.

If the cinnamon rolls are hot when you add the frosting, the frosting will melt into the rolls and you won’t see the pretty vibrant red of Santa’s hat.

Even though it can be hard to resist pulling them out of the oven right away – especially with hungry mouths around- take a few extra minutes.

Let them cool off before applying that vibrant red topping for maximal holiday cheer.

While the Santa Hat Cinnamon Rolls cool, color the icing that came with the cinnamon roll dough.

If you want extra frosting, add a few teaspoons of powdered sugar and a few drops of milk to the frosting.

More information can be found in the recipe card’s note.

I strongly advise using gel food coloring to avoid affecting the consistency of your icing.

Because gel food coloring is highly pigmented, only a few drops are required to color the cinnamon roll frosting.

However, you can change the hue to your liking.

Gently fold in the gel food coloring until the color is consistent.

Once the rolls have cooled slightly, put the crimson icing all over Santa’s hat with a butter knife.

Save this Santa Hat Cinnamon Roll recipe to your favorite Christmas Breakfast board or your Cute Cinnamon Rolls board.

If you want more frosting, you can add 1-2 tablespoons of powdered sugar and a few drops of milk to each bowl of frosting. Stir well.