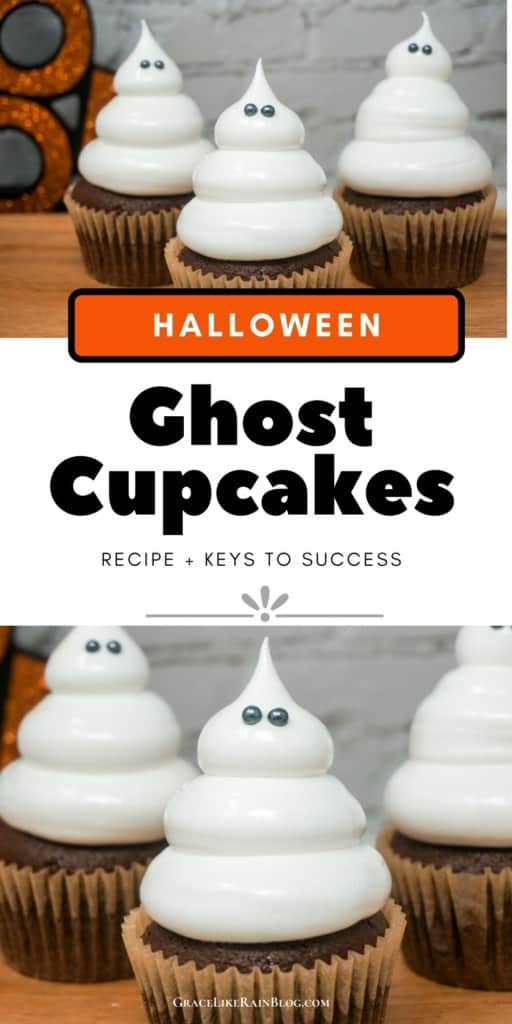 Halloween Ghost Cupcakes are a super cute Halloween treat that will steal the show at your Halloween party this year. You won’t believe how easy they are. I’m sharing all the keys to success for this quick and easy Halloween desserts.

Halloween is one of those holidays where you’re often crunched for time so we’re sharing an easy dessert that can be made quickly.

The chocolate cupcakes can be made from a boxed mix and the frosting and decorating only takes a few minutes.

Don’t be intimidated by the piping technique. I’m sharing all the details so that your Halloween Ghost Cupcakes will turn out perfectly every time.

Key to Success #1 – Use a Chocolate Cake Mix for Convenience

You can certainly use your favorite chocolate cake recipe to make the cupcakes if you’d prefer.

I just think when we’re making cute and whimsical cupcakes like ghosts, the focus is more on the design and you don’t expect to bite into a gourmet cupcake.

Plus, I really like boxed cake mixes for cupcakes because they bake up so light and fluffy.

To make the boxed cake mix into bakery-style cupcakes, we’re substituting melted butter for the oil.

This is optional. You can use ingredients and instructions suggested on the box of cake mix if you’d prefer.

Be sure to use some cupcake liners in your muffin pans.

I like to use the parchment liners made by Paper Chef. They are nonstick. If you use them, you do not need to spray them with nonstick cooking spray.

For regular paper cupcake liners, I highly recommend spraying them right before you add your cupcake batter.

Key to Success #2 – The Fluffy White Frosting is KEY

I am just the biggest fan of the Betty Crocker Home Style Fluffy White Frosting mix, but unfortunately, a lot of big box stores are no longer carrying it.

You can find it at some smaller grocery stories sometimes or you can get it on Amazon.com or Walmart.com.

I love this fluffy frosting on angel food cake and it’s the perfect base for No-Cook Divinity candy.

It is light and airy and you cannot find a substitute in a can anywhere like this frosting.

We’re using two boxes of the Fluffy White Frosting mix because these tall ghosts use up a lot of frosting.

If you have a stand mixer, it’s best to use it for this recipe.

Otherwise, you can use a hand mixer but just know going in that you have to beat the frosting for 5 to 7 minutes.

There are no substitutes for the beating time for this frosting. It’s going to take long for the frosting to make stiff peaks.

But it’s totally worth it, I promise.

If using a hand mixer, I would recommend making each box of frosting separately.

I think it would be too much for a hand mixer to handle otherwise.

Key to Success #3 – Piping the Ghosts

The cute little frosting ghosts are really easy to pipe if you have the right equipment.

Here are the supplies you need:

You can use reusable or disposable piping bags for these Ghost Cupcakes.

I like to use a disposable piping bag that is at least 16 inches long.

First, snip off the tip of the piping bag then press the piping tip down into the bag.

The piping tip should fit snugly without any gaps between it in the bag.

Once you have the piping tip fitted into the bag, scoop in the frosting. You do not have to fit all the frosting in the bag at once.

Only put as much as you can handle at once. You can always add more later.

Close the top of the bag and fasten it with a clip.

I use these clips from Ikea that I purchased on Amazon for a few bucks and they work great to keep the frosting in the bag.

How to Pipe Ghosts on a Cupcake

Piping ghosts on a cupcake is not as hard as it may seem.

Think of the ghost as three distinct sections.

You want the bottom section to be the biggest. The middle part should be a little smaller. And the top should be the smallest.

Pipe the Bottom Section of the Ghost

This section forms the base of the ghost.

When you stop squeezing the bag before removing it, you will get a flat top to your frosting. This will create a flat base for your next section.

For the Middle Section of the Ghost

Again, you want a flat base for your head so stop squeezing the bag before you move to the next section.

For the Ghost’s Head

Now your ghost is perfectly formed! The last step is to add the ghost’s eyes.

Use a steady hand to stick the eyes in place. Put them closer together than you think you need them to be.

One tip about the eyes is to add them right before your party.

After several hours, the color may start bleeding off of the black sugar pearls so it’s best to add them right before you’ll be serving your cupcakes.

Save this Halloween Ghost Cupcakes Recipe to your favorite Halloween Food board or your Halloween Party Ideas board.

We’re sharing lots of great Halloween treat ideas for your next Halloween party.